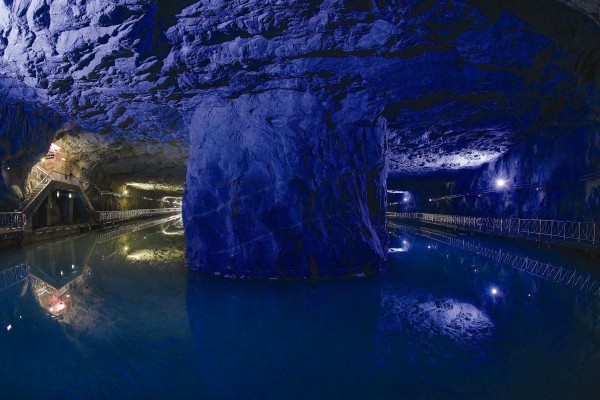 The Paiwan Tribe Settlements are located at the southeast corner of Taiwan in Pingtung County's Chunrih Township and Laiyi Township. These include Laochijia Village in Chunrih Township as well as Jiougulou, Jioulaiyi, and Wangjia Villages in Liayi Township. Most representative among these villages is the Laochijia village - it is the most completely preserved village and currently has nearly fifty stone slate constructions. For each stone slab construction, villagers must hike two hours to the valley of the Chijia River, select suitable stone slabs, and carry them up the mountain one by one. Logs are selected nearby and used as pillars and beams. The weight of stone slab houses are mainly supported by its stone walls, with wooden pillars and beams as its secondary support system; each building has seven beams. In the front are slab buttresses to prevent the building from slanting forward and to support the roof, which is also made from parallel slabs. Each house has a front yard for family members or guests to rest and chat. Since the houses were built along the mountain, sometimes the end of a house's front yard adjoined the roof of lower house, making the boundary between different houses hard to determine. This allowed people to interact more frequently and establish close relationships.

The Beinan site is located in Nanwang Village, near Taitung City. It lies about 5 or 6 km to the southeast of downtown Taitung City. The site is situated in the southeast foothills of Mt. Beinan and on the bank of the Beinan River. By including Mt. Dulan to the northeast, the site covers a vast area. The Beinan site is the largest archaeological site ever discovered in Taiwan. The total area covers about 80 hectares, with the most important areas about 20-30 hectares in size. The buffer zone includes Beinan River, Mt. Beinan, and Mt. Dulan—a sacred mountain in local Beinan culture. Beinan is one of the earliest known archeological sites in Taiwan, and is the first prehistoric settlement recovered through large-scale excavation. It is also the first instance of an archeological site being rescued in Taiwan. The 2,300- to 5,300-year-old Beinan site has the largest stone coffin burial site in the Pacific Rim and Southeast Asia, and covers an area of more than 300,000 square meters. In Taiwan, Beinan is not only the largest, best preserved excavation site, but also provides the best-preserved example of Neolithic village life.

Orchid Island and The Tao (Yami)

Located in the western Pacific, southeast of Taiwan, Lanyu (Orchid) Island is situated approximately 49 nautical miles from Taitung, 40 nautical miles from Green Island to the east, and 41 nautical miles from Eluanbi to the west. To the south, it faces Batan Island in the Philippines in distance. MLanyu was formerly known as the 'Red-headed Island.' The Yami people (also known as the Dawu) call it Pongso No Tao. Lanyu Island looks like a fist, with a total of 38.45 kilometers of coastline. The island covers an area of 45.74 square kilometers and an additional 2 square kilometer at low tide. It was formed by now-dormant volcanic activity and is 2.8 times bigger than Green Island. Lanyu is home to many unique plants and varieties of vegetation because of its special mountainous environment. The Lanyu botanical ecosystem extends from the mountains to the sea. The valley area hosts a variety of plants ranging from grasslands to forest. Lanyu Island is the only place in Taiwan where tropical rain forest plants can be seen.

The Penghu Columnar Basalt Nature Reserve is located on the northeastern coast of the Penghu Archipelago. The reserve includes three uninhabited islets: White Sand Islet, Jishan Islet and Dinggou Islet. Located in the middle of the Taiwan Strait, the Penghu Archipelago is the only island county in Taiwan that is formed from basalt. The total area of the Penghu Columnar Basalt Nature Reserve is 19.13 hectares at high tide and 30.87 hectares at low tide. The total area of the buffer zone is 74.96 hectares. These islands were formed more than 10 million years ago from numerous eruptions of lava that quickly cooled and solidified. According to geologists, basalt rock, which forms most of the Penghu islands, consists of basalt lava that flowed out of cracks in the earth's crust, which then cooled and solidified. As a result of innumerable volcanic eruptions, many unique shapes were created. Given the rapid process of solidification, the basalt lava contracted quickly and resulted in the formation of various columns and jointing.

Stone fish weirs are a kind of fish trap used in inter-tidal zones. The stone walls are built with stones obtained nearby, utilizing the tidal range to trap fish within the walls. It is one of the oldest methods for catching fish. According to studies, stone weirs were used around the world as early as the Neolithic age. They have been used in the southern pacific islands, Asian countries with coastline along the Pacific Ocean, and even in Finland and Australia. However, in terms of quantity and aesthetics, Penghu is at the top of the list. According to a survey in 1996, Penghu has over 570 stone fish weirs, including 250 in Baisha Township, over 140 in Xiyu Township, roughly 80 in both Husi Township and Magong City, three in Wangan Township, and one in Chimei Township. The latter is the world famous Twin Heart Stone Weir.

Kinmen (Jinmen) lies in the Xiamen Bay, southeast of Fujian Province, China. To the west, at a distance of about 10 kilometers, is city of Xiamen. To the east, at a distance of 277 kilometers, is Taiwan. Mashan on the main island of Kinmen is a mere 2,300 meters from the Jiaoyu Islet, administered by mainland China. Kinmen County enjoys effective jurisdiction over a total of twelve islands, including Kinmen Island, Lieyu, Dadan Island, and Erdan Island. The entire area of is 150,456 square kilometers and lies at approximately the same latitude as Taichung. Kinmen is narrow in the middle and wide on the eastern and western sides. Lieyu lies southwest of Kinmen and is wide on the eastern and northern sides, and narrow on the western and southern sides. The area of Kinmen is 134.25 square kilometers while Lieyu is 14.8510 square kilometers. Kinmen's unique cultural heritage, seen from both from a 'negative world heritage' (resistance, war, tragedy) and a 'positive world heritage (reconciliation, peace),' has universal value as an educational model and for enlightenment, representing mankind's pursuit for peaceful coexistence, corresponding to the third criterion for inclusion. Because of its unique geographical location, Kinmen has an abundance of historical and cultural sites, traditional villages and natural resources. Kinmen is the frontline for safeguarding Taiwan's national security. History relates that the island has undergone numerous battles. Evidence of these can be seen from the vivid leftover traces of war. During the Cold War, Kinmen was especially significant in terms of being the closest outpost of the democratic world facing the communist regime.

The Matsu Archipelago is located in the western part of the Taiwan Strait, in the mouth of Minjiang River, and is composed of 36 islands. The basic terrain of Matsu is characterized by the hard, tough granite found on the islands and the numerous hills and zigzagging rocky coastline. The unique settlement pattern of Matsu today is the result of activities of prehistoric man during the Neolithic age 6,000 years ago; Minyue refugees who fled there during the Han Dynasty; and finally immigrants during the Qing Dynasty who came from the coast of Fujian Province and Quanzhou and built stone houses along the mountain. Matsu became a military base during the Chinese civil war, and the land became filled with countless tunnels, bunkers, pillboxes, and batteries. The density of tunnels in Matsu is unmatched anywhere in the world. Matsu's unique cultural heritage, seen both from a 'negative world heritage' (resistance, war, tragedy) and a 'positive world heritage (reconciliation, peace),' has universal value as an educational model and for enlightenment, representing mankind's pursuit for peaceful coexistence, corresponding to the third criterion for inclusion.