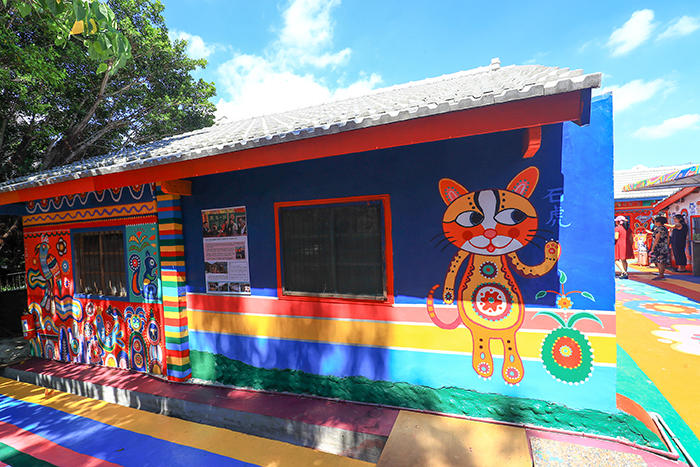 Chinese name : 彩虹眷村
Date of Construction: 2008
Location: Taichung, Taiwan
Did You Know?
When military veteran and village resident Huang Yung-fu learned that the old houses of Rainbow Military Dependents’ Village were to be demolished, he picked up his paintbrush and painted them colorfully, creating an internationally known tourist attraction and breathing new life into the village. With his vibrant colors and fairytale paintings, Huang transformed what was once a ghost town into a must-see destination, saving it from destruction in the process.

Rainbow Village is a landscaped park of painted buildings located in the Chunan Borough of Taichung City’s Nantun District. Primarily comprised of a 50-meter-long alleyway, its walls are painted with various portraits of people, birds, and buffaloes, and floors painted with rainbows, flowers, and words of blessing.

Over the years, Rainbow Village painter Huang Yung-fu has created a variety of colorful artworks throughout the remaining buildings of the village, including ones of birds, animals, and people. The brick walls on either side are painted with fascinating images in bold and lively colors, mainly pink and light blue, while the road has a magnificent rainbow. The figures on the walls have childlike lines and colors that seem to have splashed fully formed from the paint bucket, brightening up the lives of the visitors as much as the village.

Born in 1924, Huang served with the Nationalist army on the mainland during the Chinese Civil War, decamping to Taiwan with them after the war. He was discharged from the military in 1979, after which he bought his current home in Caihong Military Dependents’ Village (No. 25, Lane 56, Chunan Road). In August 2008, he started painting to alleviate his boredom, never expecting it would eventually lead to him being a beloved figure. The more he painted, the more he got into it, and with the goodwill of his neighbors, he began to expand his painting to the entire lane’s walls, windows, doors, and even gutters. Not a spot has been left unpainted. The whimsical and fantastical style became a creative catalyst, turning Rainbow Village into a tourist attraction for its vibrant colors and childlike aura.

In 2010, professors and students from Ling Tung and Hungkuang Universities chanced upon the paintings and were struck by their cute and expressive nature. Student Charles Tsai brought together students and faculty to appeal to the Taichung City Government to preserve this unexpected piece of cultural heritage, leading the "Save Rainbow Village" campaign. As the news spread, Huang himself began to be known as "Grandpa Rainbow." While the buildings didn’t quite qualify to be recognized as cultural heritage, the area has nonetheless been preserved as an “art park.”

Huang again took up the brush and painted the entire lane, and its vibrant patterns and magnificent hues became a hot topic on the Internet, leading to Rainbow Village seeing over one million visitors a year. Since then, it has gone on to be named one of the “10 Most Instagrammable Spots in Taiwan” by British travel website Culture Trip, ranked third in an online survey by Japanese travel agency H.I.S. asking Japanese travelers to choose the most photo-worthy destinations in Taiwan, and even listed as one of Lonely Planet’s "secret marvels of the world" in their eponymous guidebook.

Rainbow Village charges no entry fees, but since the patterns on the walls and floors will peel and fade after a period of time due to the weather and the large number of visitors each day, the order to meet the needs of painting and maintenance of the building, the Chinese Military Dependents’ Villages Cultural Association helped establish Rainbow Cultural and Creative Co. to help run and maintain the village while also developing merchandise that can help cover the costs of maintenance.

The property rights behind Rainbow Village are complex. It is adjacent to Matsu Village 2, Taiwan Trade Village 5, and Gancheng Village 6, and while it is closer to Matsu Village 2 and is technically included in that neighborhood, it is not under its control and does not practically belong to any of the villages mentioned above. The land itself is owned by the Ministry of National Defense, the Irrigation Agency, and private individuals.

Those three villages were demolished between 2000 and 2004 in order to comply with the Taichung City Government’s redevelopment policy, with the sites planned to be cleared out for use as roadways as part of urban renewal efforts. In November 2005, the Taichung City Government completed the “Advance Planning Project for the Feasibility of Changing the Urban Planning of Vacated Military Dependents’ Village Land” and encouraged private participation in this urban renewal project.

Today, most of the residents of what is now Rainbow Village have moved elsewhere, leaving behind as its only residents Huang Yung-fu and his wife. Rainbow Village remains a work in progress, continuing to blossom slowly but surely at the brush of Grandpa Rainbow.