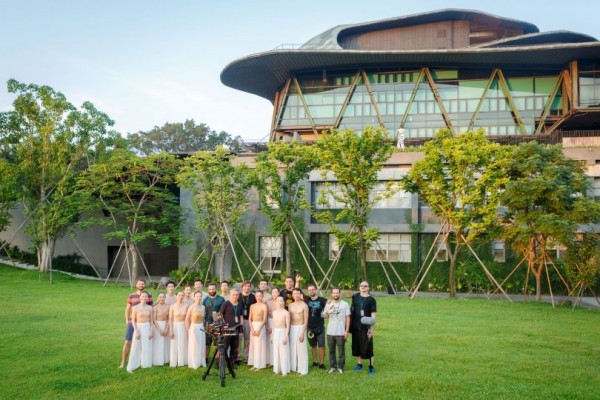 Cloud Gate Theater is home to Cloud Gate Dance Theatre, Cloud Gate 2, and Cloud Gate Culture and Arts Foundation. Integrating historical sites in the region with contemporary architecture, the large garden-enclosed complex is the first cultural park in Taiwan with performance arts as its core.

Plans for the theater were established after Cloud Gate's original rental building was destroyed in a fire in 2008. After six years of construction, the theater now consists of two indoor theaters, two practice rooms, several offices, and an outdoor space that can accommodate up to 1,500 audiences.

Located at the old site of Radio Taiwan International, the theater preserves the original architectural structure and a quarter of the original lawn as public space and outdoor stage. Nearby the theater is the Hobe Fort built in the Qing dynasty in 1886 and the Taiwan Golf & Country Club established in 1919.

The design was shaped by architect Huang Sheng-yuan (黃聲遠) and the Fieldoffice Architects (田中央聯合建築事務所). Huang actually accompanied Cloud Gate's performance tours to gain a better understanding of how to design a theater venue imbued with Cloud Gate's spirit.

To highlight the need for harmony between human beings and nature, the venue's cooper roof is colored with verdigris patina pigment while the main structural steel is a darker green color. In addition, a fragmentation design was applied to the rooftop.

The venue is surrounded by around 200 trees planted by Cloud Gate founder Lin Hwai-min (林懷民), who noted that "Cloud Gate Dance Theatre is a tree that brings together 30 to 40 years of energy from Taiwan society, so our [new] home requires a lot of large trees.”

The park also contains a sculpture commemorating the late dancer Lo Man-fei (羅曼菲), who served as member of Cloud Gate Dance Theatre and artistic director of Cloud Gate 2. The figure portrays Lo's iconic 10-minute-long spinning movement in "Requiem (輓歌),” which was choreographed by Lin in 1989.

Opened since 2015, the theater serves not only as the base for Cloud Gate's creations but also as a public venue enriching the Tamsui community with performances, cultural exchanges, exhibitions, and workshops.