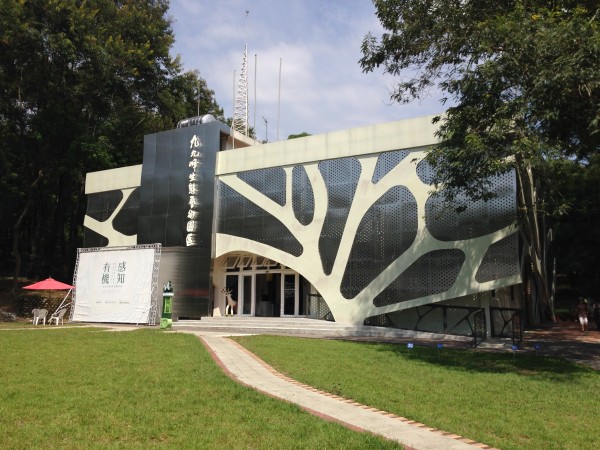 The Jiu Jiu Peaks Ecology and Art Park is a national art park in central Taiwan that was established to preserve the region's nature and ecology while bringing together artists from the surrounding areas. Managed by the Nantou-based National Taiwan Craft Research and Development Institute (NTCRI), the park aims to develop into a unique site integrating art with ecology.

As one of the "Three Huoyanshan Landscapes of Taiwan,” Jiu Jiu Peaks region was originally scheduled to become the site for the National Jiu Jiu Peaks Park by the Council for Cultural Affairs, the predecessor of the Ministry of Culture in 1997.

However, the project was suspended due to the Jiji Earthquake that devastated Taiwan in 1999. The broken cliffs and the jagged landscape formed by landslides made Jiu Jiu Peaks inaccessible for people, so the region was listed as a nature reserve area by the Forestry Bureau in 2000.

Upon the establishment of the Ministry of Culture in 2012, the suspended project was restarted with the different objective of creating a new cultural landmark that would combine ecological conservation, art, and leisure in Nantou, a county known for its crafts and natural beauty.

The Jiu Jiu Peaks Ecology and Art Park began to offer workshops, exhibition rooms, and outdoor venues that are connected by nature trails in 2014. The park also features eight public art installations that are deftly integrated with the natural landscape and ecology to present how crafts such as copper, stainless steel, and ceramics come from the land.

The eight art installations explore the relationship between human and nature, and how human activities influence the environment. "Request from Heaven (天問),” for example, raises awareness for environmental protection by using the concept of "circle” and "square” in Chinese culture to represent heaven and earth.

With efforts by NTCRI, Taiwan's main institute for cultivating and promoting crafts culture and professional talent, the park has turned the region into an art hub populated by art galleries such as Yu-Hsiu Museum of Art, a private museum on contemporary realism, and T-Dung Café, a shop combining art with coffee culture.

By bringing together artists and galleries in central Taiwan, Jiu Jiu Peaks has become an important community that promotes environmentalism and art through exhibitions, educational activities, and artist-in-residence programs.

May 2017 update: Jiu Jiu Peaks park grounds will be transferred from the Ministry of Culture to Nantou County government as part of Nantou's plans to create a Jurassic-themed dinosaur park.