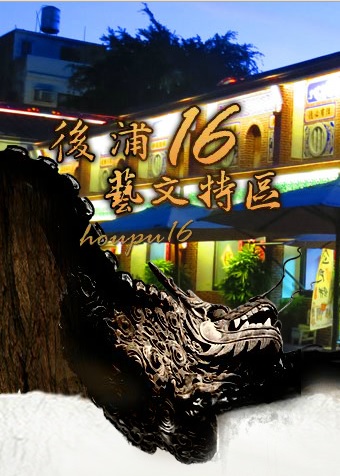 The Houpu 16 Creative Park is situated in the town of Houpu, the political and economic center of the outlying Taiwanese archipelago of Kinmen. With its origins steeped in southern Fujianese and ancient Chinese traditions, the 700-year-old settlement has much to boast about in terms of cultural legacy, of which most is preserved by Houpu 16, a renovated segment of town that now bustles with curious tourists and hospitable islanders.

As a diverse group of immigrants, the original settlers on the Kinmen islands paid homage to their Sino roots by erecting and maintaining well-gilded ancestral halls. One of the largest lineage temples that emerged by 1910 was dedicated to the family name of Chen, and a good portion of Houpu's market activities and social events soon began to take place at a plaza nearby the Chen Ancestral Hall.

As Houpu's reputation for trade grew, a row of traditional Taiwanese townhouses - all conjoined - sprung up aside the lively plaza. The two-storey buildings eventually numbered 16 and became the residence of local merchants whose family dwelled upstairs while the ground floor was used for peddling wares and other handicrafts.

Nearly a century later, however, the deserted plaza and its 16 tattered townhouses almost became a forgotten relic of the past, narrowly escaping demolition by land developers who preferred the economic potential of five-star hotels before Houpu's official commendation as a national heritage site in 2003.

After a two-year renovation period, the plaza and its surroundings became re-opened to the public in 2011 as the Houpu 16 Creative Park, a cultural hub that offers swift respite from the heat of Kinmen summers. Rich in traditional crafts and modern-day vitality, Houpu's nooks are crammed with blown glassware, stone carvings, wooden charms and auspicious amulets while tea houses, beer gardens and unique eateries await the weary wanderer.