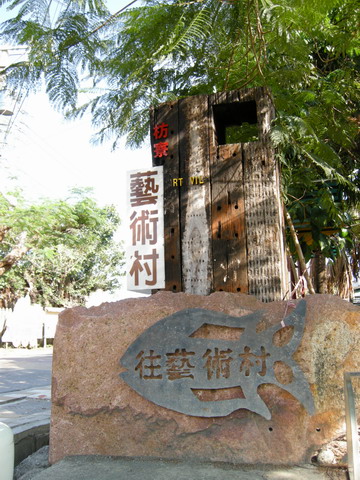 Located just a few minutes' walk from Fangliao Station in Pingtung, F3 Art Venue is a testament to how idle land can be put to good use. Converted from old dormitories that once housed Taiwan Railway Administration (台灣鐵路管理局) personnel, the art village has been part of the nationwide Art Network of Railway Warehouses (鐵道藝術網絡計畫) for over a decade. The "F” in its name stands for Fangliao, and the "3” denotes that it was the third art village developed in the project.

The venue is made up of an exhibition room, studios for groups-in-residence, and Fangliao Art Village, which is located in the old two-storey dormitories to give artists a more functional living space. In addition to their creative works, their studios have also become popular attractions.

As the terminus of the TRA Western Line, Fangliao Station was an important transportation hub up until 1991, when the South-Link Line was completed to link southwestern Taiwan to the east coast. The change left 3,210 square meters of idle land by the station, including dormitories, warehouses, and offices that became a haven for squatters and drug addicts.

The idea to transform the space into an art venue came from local residents who were concerned about their community. The Fangliao Life and Cultural Promotion Association (枋寮生活文化促進會) was founded in 1996 by members of various groups and individuals with the aim of promoting local industry and community development through remodeling.

The space was used to hold a wide variety of exhibitions, seminars, and educational activities, and F3 Art Venue was given a new lease on life in 2001, when the association applied for government subsidies for construction work. A year later, the art zone joined the ranks of the Art Network of Railway Warehouses, following Stock 20 (二十號倉庫) in Taichung and the Art Site of the Chiayi Railway Warehouse (嘉義鐵道藝術村).

While F3 Art Venue was established to promote local welfare, artists in the village stay there at their own expense. They are the ones who paid for renovating the dormitories into studios and have been responsible for rent, water, and electricity since day one.

Some of the artists at Fangliao Art Village have made remarkable contributions to the village. Fang Fu-ming (方福明), a sculptor from the Paiwan tribe who has resided in the village since 2002, is responsible for the iconic large wooden sculptures in the village.

Now in his 50's, Fang, whose tribal name is Boleng (嘎木里．伯冷), left his village when he was young to earn a living by helping out in restaurants and factories. He eventually learned fruit-and-ice sculpting in a kitchen, leading to an interest in traditional sculpture. Prior to his life as an artist, Boleng worked on a fishing boat to support his family; such tough times from his past are reflected in the frowns and gloomy looks on the faces of his life-size wooden sculptures.

The institutions of the Art Network of Railway Warehouses are uniquely connected by virtue of their rail history. The disused warehouses of the railway are particularly well-suited for art exhibitions, and trains makes the venues easily accessible.

Train stations have a special significance for the Taiwanese people, symbolizing the history, architecture, transportation, and industrial growth of the island. Rebuilding warehouses into spaces for the creation and exhibition of art represents a new role for the rail system — carrying art in addition to cargo.