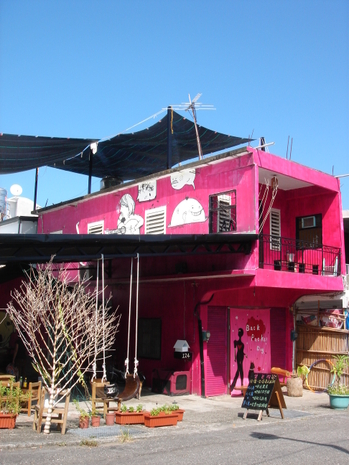 The Sintung Sugar Refinery was once a flourishing establishment billed as Taiwan's top producer of brown sugar during the 1970s. Operations came to a halt in 1991, however, due to spiraling personnel costs and the nation's shift towards industrialization.

The site itself offers well-preserved factory grounds that contain many relics from the nation's sugar-manufacturing days, including offices, flag-raising platforms, factories, and chimneys built in the style of the Japanese colonial era.

The complex was officially registered as a historic building in 2002, and opened its doors to welcome resident artists under its new identity as the Sintung Cultural Park. Comprised of artist workshops, idyllic cafes and trinket-filled stores, the Sintung Cultural Park also offers a makeshift outdoor concert venue that draws hundreds of music lovers during weekend events.

Some of the artistic establishments of the Sintung Cultural Park include:

Siki (Siky), an aboriginal wood sculptor born and raised in Dulan Village, established his workshop in 2001 to help provide a venue for large-scale art installation for fellow Amis artisans. His choice of refurnishing a portion of the long-abandoned Sintung Sugar Refinery has given the historic building a new purpose and opportunity to serve its community.

Rahic Talifo is a prolific and renowned contemporary artist hailing from Taiwan's indigenous Amis tribe. To help preserve and promote his cultural heritage, he returned to his coastal hometown in Hualien County in 1991 to experiment with driftwood, taking inspiration from aboriginal lore and symbolism. His success as a forerunner of driftwood art has taken him to international art meccas such as Avignon, Sao Paulo and New York.

Good Buy Dulan offers an eclectic collection of creative works by artists based in Dulan. Ranging from postcards, jewelry, funky tee-shirts and quirky stickers to miniature copies of the local elementary school bag, the outlet store is crammed full of personality and handmade goodness.

Taiwanese artist Paul Chiang uses artistic creation as a medium for meditation and spiritual discovery. Over the past forty years, he drew inspiration from daily life, oftentimes infusing his own philosophy into his works and producing paintings that emit warmth and vitality. From the romantic French capital of Paris to the picturesque eastern shores of Taiwan, Chiang remains in constant pursuit of capturing nature's true beauty.