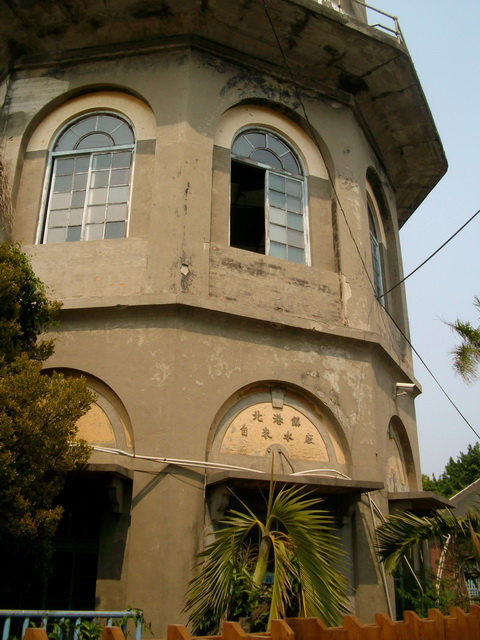 The Beigang Water Cultural Park was established to preserve Beigang Township's first water plant that is commonly known as "Shui Tao Tou (水道頭)," meaning "the waterway head." Designated by the Cultural Affairs Bureau of Yunlin County Government as a heritage site in 2006, the water plant has become a landmark that represents Beigang's history of water provision and modernization.

As the first water plant in Beigang Township, Shui Tao Tou sourced water from Beigang River. Following the treatment process of sedimentation, filtration, and disinfection, fresh water was pumped into a water tower. With a capacity of 440 metric tons, the water plant used to supply 9,646 households in the region.

After the retrocession of Taiwan, the water plant continued to be managed and operated by the Taiwan Water Corporation for decades until Beigang River could no longer be used due to pollution. In 1988, the corporation started to build a second water plant. The first water plant ceased operations in 1997.

Occupying a total of 1.28 hectares, the Shui Tao Tou water plant has a three-story octagonal-shaped water tower that is more than 20 meters high. The top floor is constructed with a water storage tank while the other two floors were used as office and meeting rooms. The surrounding park also hosted an engine room, reservoirs, and employee lodgings.

As Beigang was one of Taiwan's major ports in the past, the region used to be an important commercial hub in central Taiwan. In 1694, a statue of Matsu was moved from Meizhou Island to Beigang's Chao-Tian Temple, which attracted pilgrims all over Taiwan to worship the goodness and boosted the economic and cultural development around the temple.

Today, the Beigang Water Plant Cultural Park is the only architectural site remaining from the Japanese colonial era in that region. Featuring a unique octagonal structure made of concrete and an engine room constructed with plain bricks, Shui Tao Tou embodies aesthetical, cultural, and historical values.

Through the Ministry of Culture's "Reconstruction of Historic Scenes” initiative, which seeks to revitalize historic buildings and connect surrounding cultural venues, efforts are now underway to improve the water plant park and make it a premier cultural destination in Beigang, Yunlin.