Kishu An Forest of Literature 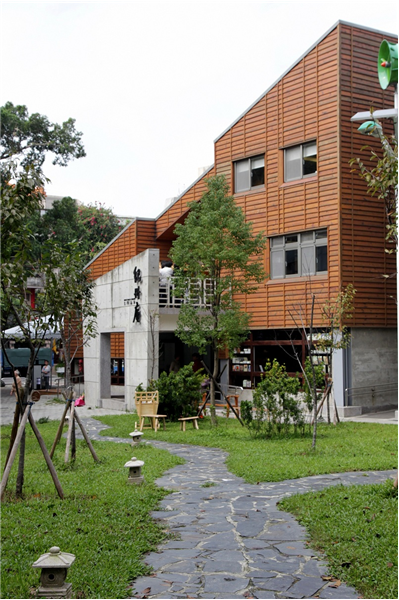 The Kishu An Forest of Literature is a newly established cultural park converted from a restaurant built in the Japanese colonial era. After experiencing several transitions, the building has been reintroduced to the public as a multi-functional center that houses a literary-themed bookstore, tea house, and spaces for holding cultural events.

Originally established by a Japanese family who migrated to Taiwan in 1897, Kishu An used to be a restaurant offering Kanto cuisine and Japanese geisha performances. During the Pacific War, it was closed to accommodate injured soldiers and civilians. After the end of World War II, the building was taken over by the government of Taiwan.

During the 1970s, publishers started to emerge in the region that houses Kishu An, slowly transforming it into a cradle of a new generation of Taiwanese writers. Author Wang Wen-xing once said: "What impressed me the most is not the architecture of Kishu An, but the river and natural landscapes around the complex that provided me with the best education in the arts."

In 1996 and 1998, two fires damaged the three-story main building and its annex, leaving only the "hanare," a detached cottage used for hosting dinner parties. In 2002, local students and residents launched a campaign to protect Kishu An and the old trees in the area from being demolished by the city government's urban renewal plan.

In 2004, the remaining cottage, along with the 10 old trees surrounding the site, were collectively designated as a historic site by the Taipei City Government. In 2011, Taipei's Department of Cultural Affairs established a new building next to the detached cottage and reorganized the site to become the first literary-themed cultural center in Taipei.

Managed by the Taiwan Literature Development Foundation, the new Kishu An Forest of Literature has held numerous literary events, including salons, forums, and book discussions, since its establishment in 2011. It also holds frequent exhibitions on literature to introduce Taiwanese writers to the public.

In 2013, portions of the site were closed for repair work and reopened after two years. Retaining its original layout, the restored cottage is a rare type of Japanese architecture that is not often seen around Taiwan.

Today, the historic site not only stands testament to Taiwan's preservation efforts, but also serves a place that brings together memories of literary establishment in Taipei. By combining local history with cultural activities, the heritage building helps to bring literature into everyday life.