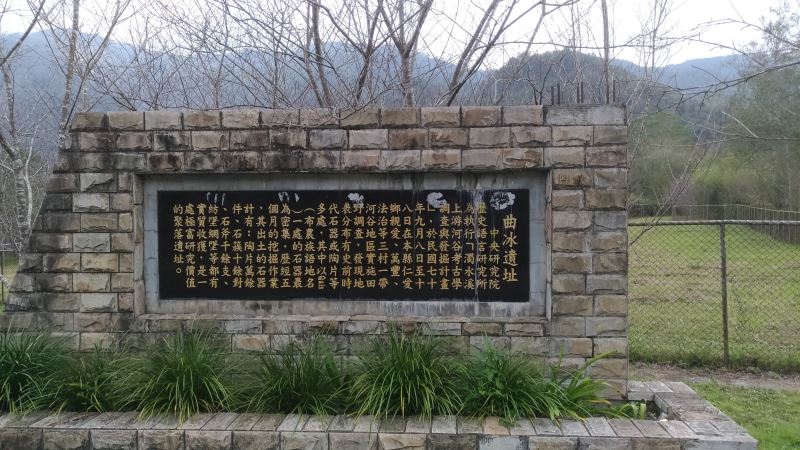 In 2019, the Qubing (Qais) Archaeological Site in Nantou County was named by the Ministry of Culture as Taiwan's 10th national archaeological site. Located in an alpine river valley nearly 1,000 meters above sea level, the site was the first prehistoric mountain settlement found in Taiwan and is also the most completely preserved such site. As such, it is of tremendous importance to understanding the development of settlements, environmental adaptation, and human migration in prehistoric Taiwan.

In 1980, archaeologist Chen Chung-yu (陳仲玉) was on a group hike along a mountain trail following the Zhuoshui River. As they passed through the Bunun tribal village of Simaun (known as Qubing in Mandarin), he paid close attention, because as early as 1935, Japanese anthropologist Tōichi Mabuchi had found a stone axe at the same site. Chen struck it lucky during that hike, spotting prehistoric stone tools on the hillside near the trail as they headed out from Simaun and the Siyuan Suspension Bridge.

The following year, he launched the Upper Zhuoshui River Valley Archaeological Survey and Excavation Project under the leadership of historian Shih Chang-ju (石璋如). The project uncovered the Qais cultural layer (qais being Bunun for "boundary") north of Simaun, with a wealth of findings that could be positively identified as prehistoric. Shih named it the Qubing Site.

From 1981 to 1987, the site underwent three digs, finding a densely populated place rich with the remains of homes, slate coffins, and a stone tool workshop. As well as digging up stone, jade, and ceramic items, researchers have also found a number of tools like fishing nets. Scholars will cover the finer parts of the dig with non-woven fabric and fill it out with fine sand for future planning as educational displays, ensuring everything within is properly protected.

The Qubing Site has two cultural layers, spanning from the Neolithic Age to the Copper Age. Thus far, the oldest findings date back to 4,000 years ago, with the main settlement of the area by prehistoric people happening in two batches, between 3,000~2,300 years ago and then 1,300~1,000 years ago. A wealth of ruins and relics have been found in the site, including the foundations of at least 48 homes and 171 slate coffins.

Slate coffins are commonly found in prehistoric sites in eastern Taiwan, but so far, the only ones found on the western side of the island are at the Qubing and Damalin (大馬璘) sites, demonstrating the important role the Qubing Site played in cultural exchange between eastern and western Taiwan. The jade items unearthed use jade mined in eastern Taiwan, further demonstrating Qubing's position as an important hub for the exchange of materials and jade-crafting techniques between the two sides of the island.

The Qubing Site was discovered in the upper reaches of the Zhuoshui River valley. From the remains of slate wall reinforcements found at the site, archaeologists are able to determine the type, size, and scale of the prehistoric houses they were part of. Researchers also believe that the Qubing Culture's stone- and jade-working methods were quite well-developed based on the items and materials unearthed, along with the worktables that have been found, reflecting the history of cultural exchange between eastern and western Taiwan.