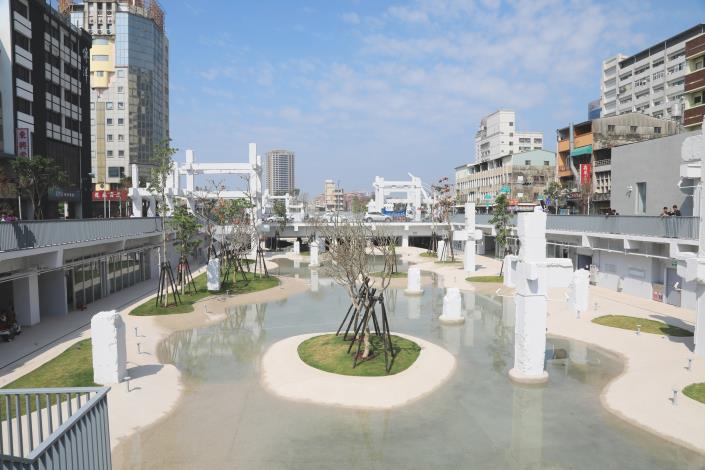 Name: 河樂廣場
Year of Establishment: 2020
Location: Tainan City
Did You Know That...? In its past life, The Spring (河樂廣場) was one of Tainan’s major shopping districts. After being demolished, though, the site was converted into a family-friendly water-focused recreational plaza and was listed among “7 Picturesque Public Parks Soon To Sprout Around The World” by Forbes Magazine in 2016. The plaza was designed by the Dutch architectural firm MVRDV, who built their concept around the idea of an “lush lagoon,” with a recessed open-air water space integrated with the surrounding ecology and canal network to create a massive family-friendly lagoon in the city.

In 2016, the Tainan City Government initiated the demolition of the old China-Town shopping mall, with Dutch architect Winy Maas heading up the renovation plans. Hailing from a country known for its many dykes and canals, Maas put forward an idea of a public-oriented design that would tie in with Tainan’s own canal network. Maas’ team studied the city and the area, finding that the old China-Town mall area used to be a canal section itself, and so they decided to try and recreate that with a modern vision and landscape, calling to mind the site’s bustling past. The team took great pains to reuse the building materials from the mall and set an outstanding example of innovation in circular economies, creating a plaza that combines eco-friendly landscaping with a recycled water system. MVRDV describes the plan as “a public space design that includes the transformation of a former city-centre shopping mall into an urban lagoon surrounded by young plants that will develop into a lush jungle, reconnecting the city with nature and its waterfront. Commissioned by the Urban Development Bureau of the Tainan City Government, the completed masterplan rejuvenates a ‘T-Axis’ to the East of the Tainan Canal, creating a new landscape strategy to unify the site of the former China Town Mall and a kilometer-long stretch of the city’s Haian Road. In addition to the new public square and urban pool, the plan includes improved public pathways, a reduction in traffic, and the addition of local plants.”

For example, a part of the second basement floor is exposed through glass panels, providing visitors with a glimpse of the site’s past. This not only allow the public to hark back to the old shopping mall in the historic city’s past, but also provide a glimpse into the former prosperity of Tainan’s canal system, the rise and fall of China-Town, and the site’s transformation into its modern form.

The name of the site, “The Spring,” was chosen for its twin connotations of both a natural spring and the homonymous season. Between them, both meanings carry with them images of life and vitality, hinting towards a future for the site that will be similarly vibrant and prosperous long into the future.
The concrete structure of the building has been artistically deconstructed and retained for future reuse as storefronts, stalls, pavilions, service centers, and other highlights. The plaza, meanwhile, is planted with a large number of native plants to simulate the natural green landscape of the eastern part of Tainan and to give the public the opportunity to enjoy history, culture, and nature in an urban jungle.

As for their design inspiration, Maas has revealed that the team drew their inspiration from the broader historical context of the city, with both the original forest landscape of the area and its hydrology serving as important sources of ideas. Reintroducing a degree of natural greenery was also a major focus of their overall planning. In addition, the lagoon has been carefully planned to ensure that it can serve as a perfect gathering place all year round: the water level rises and falls with the rainfall, and when the weather is hot, it is cooled by fogging, providing a cooler environment for the public and saving on the need for people to use air conditioning in the summer. For safety reasons, the water level is capped at no more than 50 centimeters in depth, but this does little to diminish the beauty of the plaza, and despite the shallowness, people can still sunbathe or play in the water. At the same time, to maintain the water quality, the lagoon is equipped with 24-hour automatic water circulation system.

With the concerted efforts of everyone involved, The Spring has earned a positive appearance in The Guardian, one of the United Kingdom’s three leading major newspapers. It was in their pages that British architecture critic Rowan Moore listed it among his “five best of 2020.” In 2020, the site also received a number of awards and honors, including from the Excellence Award of FIABCI—Taiwan Real Estate Excellence Awards, the Yuan Ye Awards, and the Golden Pin Design Awards.