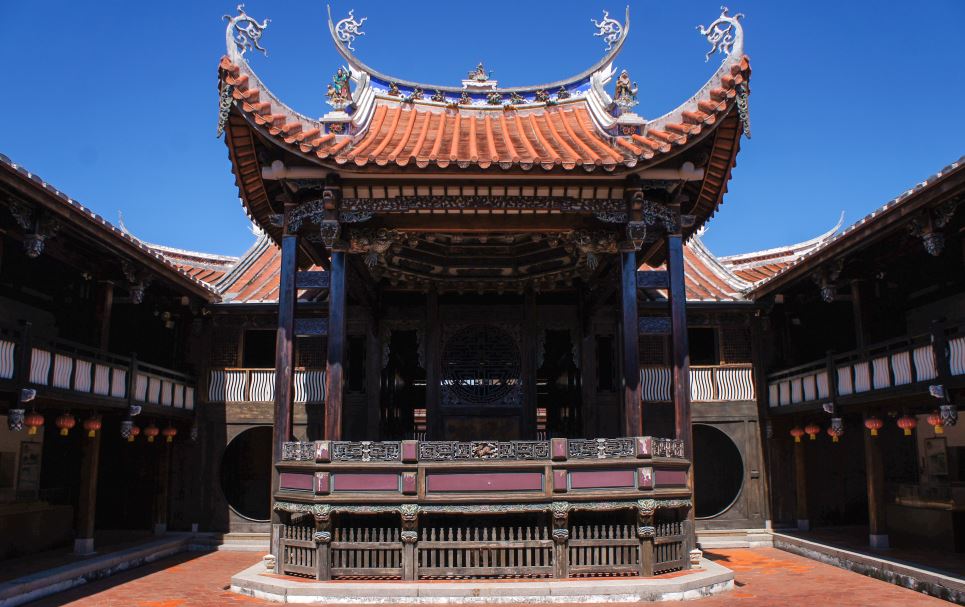 Chinese Name: 霧峰林家宮保第園區
Established: 1895
Location: Taichung, Taiwan
Did You Know? The Lin family of the Taichung area of Wufeng was one of five major families in Taiwan during Japanese rule and made important contributions to society, education, and culture, earning them a reputation for being a true renaissance family. Since the middle of the 19th century, the Lin family has been among the most influential Taiwanese families. They were involved in affairs on both sides of the strait, helping pacify the Taiping Rebellion and the wake of the Tai Chao-chuen Incident (戴潮春事件), as well as being involved in the Sino-French War and having their own militia of thousands of fine men. On top of this, they also controlled a significant amount of agricultural land in central Taiwan and held the rights to selling camphor.

The Wufeng Lin Family Home Garden (峰林家宮保第園區) refers to a complex of gardens and housing in the Wufeng area of Taichung. It includes three parts—the lower house, upper house, and Laiyuan courtyard—and was the largest traditional residential housing complex in Taiwan, set out in a four-stage plan shaped like two concentric squares. The open area of the garden contains two buildings from the lower house, Gongbaodi and Dahua Hall.

The Wufeng Lin Family’s Gongbaodi is the only remaining Qing Dynasty official residence in Taiwan, having been home to Lin Wencha, who had been appointed head of the waterways. Since beginning construction in 1858, it has stood as iconic of the style of official residence from southern Fujian that was imported to Taiwan. Having led troops in battle against the Taiping Heavenly Kingdom in Zhangzhou, China, ultimately dying in Wansongguan, Lin was posthumously awarded the title of "Crown Prince's Young Protector" by imperial decree in 1864 and became known as Gongbaodi. The overall layout of the eponymous building is symmetrical, with a five-layer, 11-room layout. The first and second entrance halls were added by Lin Chaodong between 1870 and 1883, while the fourth and fifth were added later and completed in 1895.

The Lin Family Residence's Dahua Hall is the only one of its kind in Taiwan. Built for military meetings and public banquets, the hall was completed in 1894 and was a symbol of the Lin family’s prosperity at its height.

Another section of the lower house is the "grass huts," a traditional sanheyuan complex with a granary, a gatehouse, and a large garden outside. It was constructed around 1837 and was an important part of the living space for the Wufeng Lin family in its earlier days.

The Laiyuan courtyard, which is now the campus of Taichung's Mingtai High School, is home to several structures and landscaped gardens built by the Lin family by 1875. In 1893, after passing the imperial examination, Lin Wenqin built a large-scale garden for his mother to enjoy her old age to show his gratitude for her hard work in raising him. He named it "Laiyuan," the garden of Lai, after the traditional moral tale about Old Master Lai, who delighted his aging parents with colorful and fanciful entertainments in their twilight years. The garden has an indelible place in architectural history in Taiwan, with its beautiful scenery and many