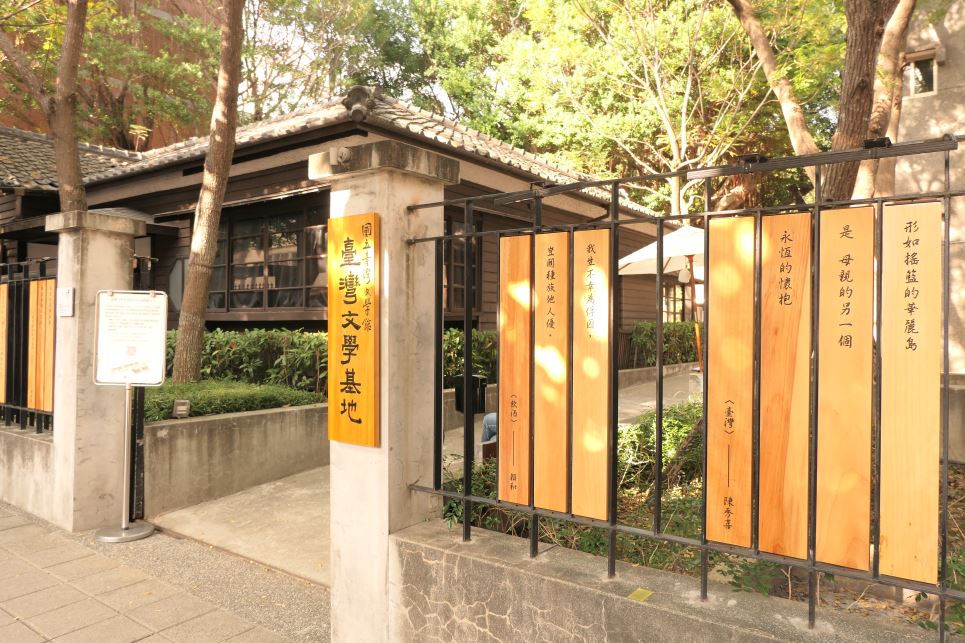 Chinese Name: 臺灣文學基地
Established: 1920s to 1940s
Location: Taipei City, Taiwan
Did You Know That...?
The grounds that now play host to the Taiwan Literature Base were previously the home to the Qi Dong Poetry Salon. As a result of a growing movement encouraging efforts to preserve community cultural heritage and history, of which Taiwan Literature Base has been a part, a wealth of local stories and historical materials have been collected and preserved. The site was registered as a historic building by the Department of Cultural Affairs Taipei City Government in 2004 and ultimately transformed into Taiwan Literature Base in 2020. The new Taiwan Literature Base officially opened to the public on January 19, 2021. Its 1150 square meters art space is expected to become a gathering place for creative energy and an important hub for driving Taiwan's cultural value and influence.

The Taiwan Literature Base is located on Qidong Street, which during the late 19th century was an important road connecting the areas of Bangka (now Wanhua, Taipei City) to Zhucuolun (Zhonglun, Taipei City), Xikou (Songshan, Taipei City), and Jilong (Keelung City). The road was mainly used to transport coal, rice, and a variety of other daily necessities. From 1920 to 1940, while Taiwan was under Japanese rule, the Governor-General had Japanese-style civil dormitories built here. Built in the dominant architectural style for such official dorms at the time, the dormitories went on to become iconic representatives of the style of the late Japanese period. At the same time, the surrounding area also became home to a number of companies and factories in various industries, becoming an increasingly developed commercial area. This also led to the establishment of the Chengdong Association(城東會), which played host to community speeches, theatrical performances, film screenings, and other activities and was an important part of fostering a boom in the artistic community there.

After World War II, the government used this area as a dormitory for central government officials. One of the old dorms was home to General Wang Shu-ming, resulting in it being named as “General's Residence" until the 1990s. With Qidong Street located in the heart of the city, after the turn of the millennium and the subsequent rapid urban development, the Japanese-style dormitories were faced with potential demolition. Fortunately, with the buildings, trees, and environment increasingly recognized by the locals for their historicity, residents formed the Qidong Street Cultural and History Office in 2002. Thanks to the efforts of residents, experts, and scholars, the nine linked buildings of the dorms were successfully preserved. In 2004, the Department of Cultural Affairs Taipei City Government registered the site as a historic building. Two years later, in 2006, it was designated by the Taipei City Government as a historic site and building, making it the first batch of Japanese-style dormitories to be preserved by the Cultural Heritage Preservation Act, and then in 2020, it became the Taiwan Literature Base. The National Museum of Taiwan Literature commissioned Taiwan Interminds Publishing to operate Taiwan Literature Base, officially opening to the public on January 19, 2021.

The building has been converted into seven buildings with different themes and functions, connecting various aspects of literature. The two buildings that originally housed the Qi Dong Poetry Salon have been renamed the Joy of Reading Hall and Qidong House—the former serving as a space for all-ages activities and reading picture books, while the latter is planned to host the permanent exhibition "The Birth of The Literature Base: A New Chapter of the Old Houses." There are also five newly restored buildings, including the Muse Garden, Literature House, Creative Workshop, and Exhibition Hall. In order to help the public get involved in literary and cultural activities in these Japanese-style dormitories with Taiwanese historical and cultural value, a variety of exhibitions, performances, writers-in-residence, courses, lectures, walking tours, and cultural markets have been planned. In addition, the well-known matcha shop Ping An Jing Matcha One has been set up in the park, enabling visitors to spend their time among these Japanese-style buildings with the smooth taste of matcha. In addition to the main buildings, the area also includes three air-raid shelters, the "Lawn of Happiness," the "Glass House."

Taiwan Literature Base has two specially designed virtual mascots, Qi Qi and A Fei, hoping to connect the local community and its literary tales through their perspectives. Through professionals from various fields, Taiwan Literature Base will work to develop a broader reading market for Taiwan through the recreation of literary texts and adapting them across media, providing a crucial element to driving Taiwan's cultural value and influence in the future.

(Photo courtesy of Taiwan Literature Base)