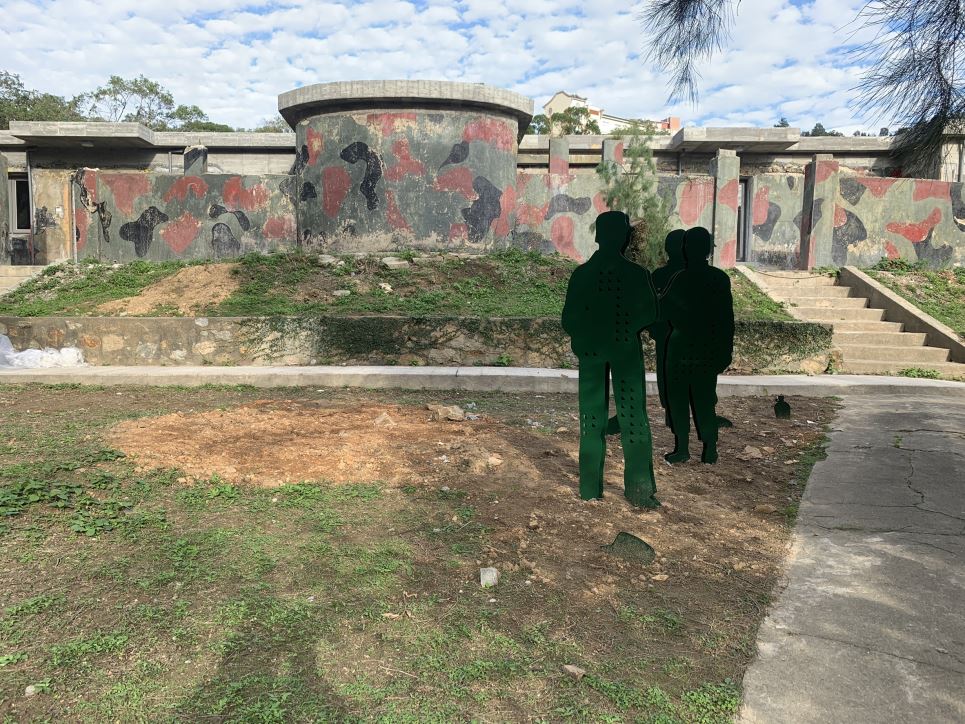 Chinese Name: 連江縣梅石特約茶室
Date of Construction: October 3, 1957
Location: Lienchiang County, Taiwan
Did You Know?
Meishi is in the core area of Nangan in Lienchiang County. In 1949, when the ROC Army was first stationed on the islands, a cultural and recreational center was set up in Meishi, and the area developed into a recreational area for both the military and civilians. The settlement evolved from a simple fishing village into a multi-purpose military camp and vacation center, hosting a movie theater, "special tea room," and shopping street, making it a place for rest and recovery on the front lines of Matsu. After the end of military operations in the area in 1992, the site was renovated, preserved, and revitalized, injecting new life into this old space.

To address the problem of sex crimes, meet the living needs of officers and soldiers, and help the physical and psychological conditions of the military men stationed on Taiwan’s outlying islands, the Ministry of National Defense formulated the "Interim Measures for the Establishment of Military Brothels" in 1952, launching pilot brothels dedicated to providing sexual services to officers and soldiers in the military. After two years of trial operation, the Ministry of National Defense made the establishments fully legal. In 1957, in order to address negative public opinion, maintain the military's reputation, and correct general conceptions, the Ministry of National Defense revised the interim measures to the "Implementation Measures for the Establishment of Special Tea Houses," renaming the brothels "special tea rooms." The Officer's Special Tea Rooms still standing were largely built in 1959 and officially ended their service in 1992.

With rising awareness of the need to preserve battlefield cultural heritage, in 2018, the Lienchiang County Cultural Affairs Department, together with the Ministry of Culture, launched a project to reconstruct historical sites. The work would combine comprehensive preservation with other ongoing cultural heritage preservation work, such as the preparation of world heritage sites, combining military heritage, Eastern Min-style settlements, and the natural environment, with a focus on life on the front lines in Matsu in the late 20th century, where the military and civilians lived side by side. At the same time, it also aims to reproduce the life of the fishermen of the past, the Eastern Min style of the settlements, and the religious and folk culture of the islands. The reconstruction of these historical sites was also considered a new opportunity for the local development of Matsu.

Soldiers were divided into classes, and the special tea rooms were also divided into ones for officers and ones for enlisted men. Today, the tea rooms function as "special cultural inns," combining exhibitions of historical special tea room elements with visitor accommodation, recreating the historical scene by retaining the ticket booths and special suites on either side of the lobby and the sky blue and pink paint that aimed to create a joyous atmosphere. The lobby on the first floor still has the old hollow brick walls and terrazzo floor, with light diffusing in through the high ceiling and roof to transform what had originally been a dim and dark environment. A special suite was selected for the west side of the lobby, and once the old roof was removed, the pink walls originally hidden in the depths of the tea room were brought to light, symbolizing the new life being injected into the old tea room. Facing the sea to the south stands a cafe with a steel structure, sheet metal roof, and floor-to-ceiling windows which are gently attached to a pre-existing building, offering a panoramic view of the sea view of Meishi Bay.

On the other side, the special tea room for soldiers has a unique V-shaped configuration to conform to the terrain, its camouflage façade and air-raid shelter in the lobby exude a strong wartime aura. This area retains the existing walls and spatial configuration of the lobby and is reinforced with reinforced concrete shear walls to form a composite structure with walls more than 40 cm thick. A dim light penetrates into the room through the openings in the thick wall, lightly illuminating this unique historical exhibition space. The left wing of the V uses a long, lightweight steel structure to create a multi-purpose activity space. One side of the left-wing has retained the existing masonry, while the floor-to-ceiling glass windows showcase the old construction methods, creating a strong contrast between the light and the heavy, the new and the old. The right-wing, meanwhile, sports a damaged and mottled old wall, while the layout and scale of the central hallway and the special suites on either side have been restored with rough-grained wood and fair-faced concrete. Above the hallway, high windows introduce diffuse sunlight from the sky, reflecting memory and history through changes in light and shadow.

The "Officer's Special Tea Room" has now been transformed into the entrance of a museum for Meishi, as well as offering a space for unique B&B and dining experiences; the "Soldier's Special Tea Room," meanwhile, has become a base for young entrepreneurs, a workshop, and a hostel. It has been renovated and partially preserved, allowing visitors to witness a dialogue between past and present as they play their part in bringing new life to this old space.