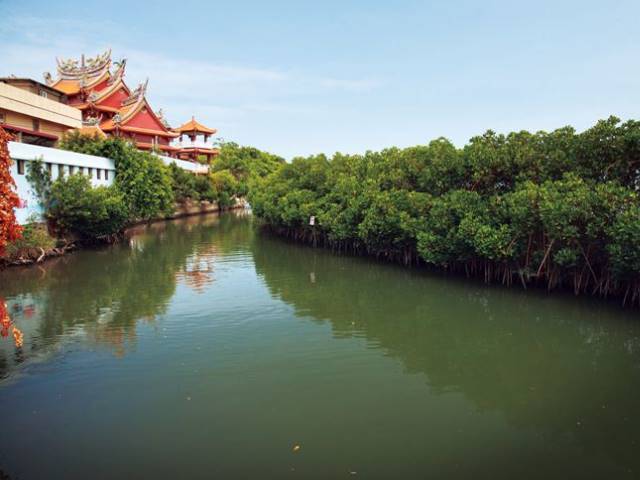 Located along the southwest coast of Taiwan, the 34,405-hectare Taijiang National Park is Taiwan's eighth national park that offers a rich example of the wetlands of Taiwan's coastal environment.

The national park includes two international-class wetlands, the Zengwun Estuary Wetlands (曾文溪口濕地) and the Shicao Wetlands (四草濕地); and two national-class wetlands, the Qigu Salt Field Wetland (七股鹽田濕地) and the Yanshuei Estuary Wetlands (鹽水溪口濕地). The main objectives of the Taijiang National Park are to protect biodiversity and to preserve ancestral history and the industrial fishing culture.

The Tainan coastal area is one of the earliest areas developed by Han immigrants from mainland China. It was also home to the Siraya Pingpu tribe (西拉雅平埔族). It has witnessed the history of the Han population's immigration and land cultivation over many years.

Used for a long time as salt fields, harbors, and fish farms, the Tainan costal area has preserved a vast expanse of precious wetland ecosystems. It has a considerable quantity of mangroves, and also has become a major habitat for rare birds such as the black-faced spoonbill.

Consequently, the Taijiang National Park is devoted to promoting ecotourism. The main purpose of ecotourism is to protect precious nature ecological resources from the negative backlash of recreational activities. Ecotourism not only increases the depth of the traveling experience, it can also raise awareness and consciousness of the need to protect the sustainability of natural species.

Ecotourism puts an emphasis on natural ecosystems and culture, and such philosophy is especially important in areas such as the Taijiang National Park, which contains unique landscape that can suffer irreversible environmental harm.

Unlike other wetlands in western Taiwan, Taijiang National Park is the only place that simultaneously presents the natural environment of wetlands, cultural history such as the salt fields industry, and historic sites such as ancient battlefields.

Cruises along the Taijiang route allow visitors not only to appreciate the abundant and beautiful ecosystems of the mangroves, but also to cherish the memory of the historical remains of the war engagement between Chinese defender Zheng Chenggong (also known as Koxinga, 國姓爺) and the Dutch colonists.

Tourist boats following the Green Tunnel route, the first artificial canal in Taiwan, start from the back of the Shicao Dajhongye Temple (四草大眾廟) and cruise through the mangrove reservation. The craft are mostly shallow-draft rafts made using bamboo or PVC pipes lashed together, and scenery along the coast is similar to that of the Amazon River. The setting has won this area the sobriquet "the pocket edition of the Amazon River.”

There are currently four kinds of mangrove forests in Taiwan, with the number of species in Taijiang National Park numbering the highest in Taiwan. The tidal flats of the mangrove forests are also teeming with plankton and cultured oysters, the milkfish of the Taijiang inland sea, and various kinds of birds; visitors can see egrets, night herons, and grey herons.

The area also claims to be Taiwan's oldest mangrove forest. Tourists can tour the rich green forests on a raft, with the branches and leaves of the mangrove trees interwoven overhead to form an aquatic green tunnel. The shade of the trees is reflected on both sides as the rafts calmly sail through, forming ripples on the quiet water, a fascinating scene that never fails to astonish visitors.