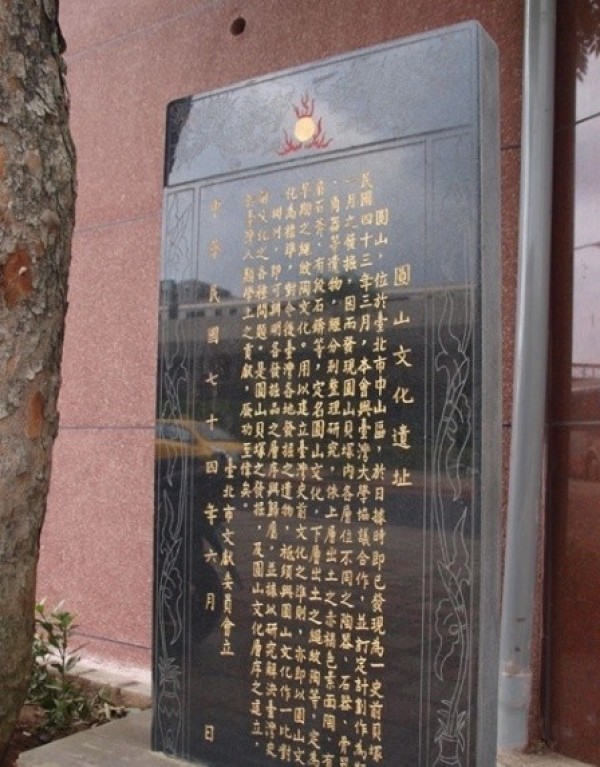 Generations of Taipei-born children spent their weekends riding in a fantastic merry-go-around and bumper cars at an amusement facility built over a small hill alongside Zhongshan North Road.

Then in 2010, local and foreign guests flocked the hill when the region served as the main venue for the Taipei International Flora Expo. Little did the visitors know, however, that they were standing on top of one of the most important archaeological sites in Taiwan — the Yuanshan Prehistoric Site.

The exhibition room is placed over a part of the excavation pit of the original Yuanshan site, along with a model and a huge picture that displays a re-creation of the site where these ancient people lived thousands of years ago.

The original excavation site itself remains a meadow that is circled by glass walls and stands near Yuanshan MRT Station on the Tamsui Line, quietly guarding cultural artifacts dating to the late Neolithic age.

The site was first discovered by Japanese researchers during an archeological survey of Taiwan in 1897. They found some stone tools and shells at the site, and were able to confirm the existence of what was later called the "Yuanshan Shell Mound,” the largest prehistoric shell mound ever discovered on the island.

Subsequent excavations have further confirmed two layers of culture on the site: the upper layer is called the Yuanshan Culture because the first discovery of the culture was made at this site, and the lower layer is a thick cord-marked pottery culture from an earlier period.

Distinguishing features of the Yuanshan culture included their beautiful and delicate pottery painted with reddish-brown pigment. Sometimes they also came in grey, black or light yellow, which sets them distinctly apart from the pottery found by archeologists at sites in southern Taiwan from about the same period of time.

Other discoveries include vast mounds of shells mixed with animal bones, stone, jade, pottery, bone implements, and funerary objects, pointing to the fact that Yuanshan was a civilization that was extensively distributed across northern Taiwan and featured highly-developed craftsmanship.

The significance of the Yuanshan site

The Yuanshan Site is representative of what is officially known as the Yuanshan Culture, which dates back to around 3,000 and 2,000 BC.

Archeological studies have revealed that the Taipei Basin, which now houses more than three to four million residents and serves as the political and economical center of Taiwan, was once covered with a huge lake.

Yuanshan, which literally means "Round Mountain” in Chinese, used to be a sandy, rocky hill at an altitude of 36 meters above sea level located in the northwest corner of Taipei Lake.

The ancient Yuanshan people are believed to have lived on the mountain, and their civilization was based on digging for shells, fishing, cultivating agriculture, and domesticating animals.

The huge shell mounds found at the site make it evident that the Yuanshan people dug for shellfish that lived in the semi-salted waters. After centuries of accumulation of the post-dinner waste, the whole site eventually grew into a giant mound of shells.

The Yuanshan people also followed the practice of burying their dead in holes dug into the shell mound, pulling teeth, and headhunting. These are unique traditions of a now-gone civilization.

Even decades after their first encounter with this particular civilization, scholars continue to study the Yuanshan site in attempt to find the last remaining puzzle piece: where did the residents of Yuanshan come from?

Archeologists still have difficulty in determining the origin of the culture. Some believe they came originally from cultures related to China's Hainan Island or from Guangxi Province, because of the similar sharp-headed stone tools they have found in these places.

Nevertheless, the archeologists are sure of one thing — that the Yuanshan Culture is strikingly different from previous cultures on Taiwan.