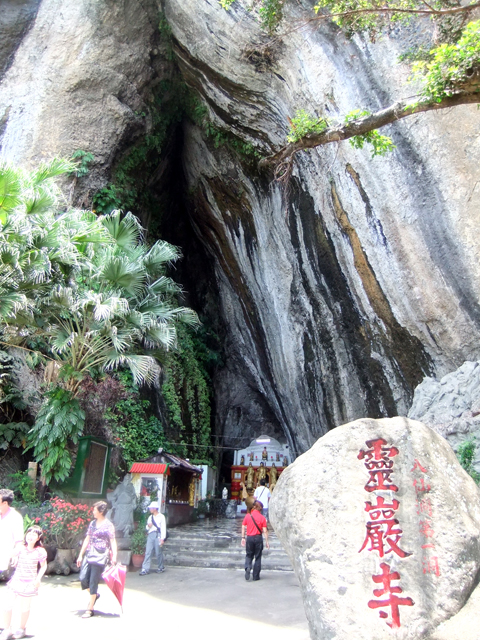 Along the seemingly endless coastal highway of Taitung County, dozens of inlaid caves will unexpectedly appear on the seaside cliffs. Collectively known as the Caves of the Eight Immortals, or the Basian Caves, these sites have yielded the earliest known prehistoric civilization in Taiwan — the Changbin Culture (長濱文化).

The Changbin Culture is a prehistoric Paleolithic Age culture that flourished in Taiwan roughly 30,000 to 5,000 years ago. This pre-pottery culture spread along the coastal area in places as far such as Siaoma Cave (小馬洞穴) and Longdong (龍洞) deeper in the Taitung region, as well as Longkeng (龍坑) in Hengchun, which are all beyond the main Basian Cave site.

The first inkling of the importance of the Basian site was discovered in March 1968, when the late Professor Lin Chao-chi (林朝棨) of the National Taiwan University's Department of Geosciences came across archaeological layers that he deemed worthy of further investigation during a geological survey.

Later, from 1968 to 1970, Professor Sung Wen-hsun (宋文薰) of the National Taiwan University's Department of Anthropology led an excavation team who finally discovered remnants that proved the existence of the Changbin Culture.

Today, the Visitor Center down the hill from the caves is the showroom for some of the long-buried relics. Visitors can linger and study the information available about the Changbin Culture here, together with a brief introduction of the caves' stages of geological formation.

Facing the Pacific Ocean, the seaside cliff stands at around 380 meters. The tens of caves that dot the landscape here are called "Loham” by the local aboriginal Amis, a phrase that means "caves.”

Although Amis legend attribute the creation of the caves to the unjust execution of a tribal beauty named Ilin, the caves are simply the result of sea erosion at different levels as tectonic action continuously push the stone cliffs further out of sea.

Accessible by wooden paths, the main eight caves of the Basian site each have their own unique characteristics. For example, Lingyen Cave (靈岩洞), the largest cave of all, presents an upright appearance because it was formed as sea waters invaded the cracks along the rocks.

Then there's Chauyin Cave (潮音洞), which is formed in a half-circle. This is where archaeologists have excavated the greatest amount of relics in the Basian area, including single-sided choppers, flakes, bones, and fishing and hunting tools.

Analysis of the materials that have been unearthed allows modern-day visitors to imagine what the Changbin people's daily life was like. They took advantages of the shelter offered by caves or even the shade afforded by rocks as a residence or temporary shelter; they used bone and stone tools to fish, hunt and gather food; and they also knew how to use fire.

Topping the Paleolithic Age cultural layer are layers in which no human traces have been found. Above this mass, archaeologists have excavated relics left by late Neolithic Age humans, who used polished stone implements and red pottery.

The Basian Cave site has so far produced around 40,000 pieces of stone, bone, animal and fishbone tools. Latest principal findings also include seven newly discovered caves that bump the total number of known caves at the site to 24. Plenty of remnants from the Neolithic Age have been unearthed, as well as ancient fire pits from the Paleolithic Age.

Human in different eras had different ideas regarding the best use for these caves. Ancient humans took them as shelters or fishing bases where they made preparations for their fishing work. Now, contemporaries exercise their imagination by transforming them into altars.

In addition to their archaeological value, the Basian Caves are also geologically significant. Once below the sea level and now located high above the waters due to the rising of the Earth's crust, the Basian Caves preserve a clear record of geological changes that have taken place on the east coast of Taiwan.