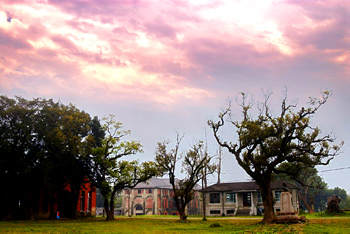 Despite its misleading title, the Tainan Old Watercourse is actually an historic water purification facility. More than 100,000 people once depended on its sand filtration system for safe drinking water in Tainan City, and its existence became part of the economic engine that drove the region's prosperity.

Zengwun River (曾文溪) is one of the Tainan region's most important resources. Controlling this water source has been a priority for the various regimes that have ruled Taiwan, and soon after Japan's 1895 takeover of the island, plans were made to build a riverside facility that could supply clean water to Tainan City.

The facilityhas not been in use since the 1980s. But the elegant Western-influenced complex — with its original square ceramic tiles replaced with faux-tile metal sheeting — remains a striking sight.

When Gotō Shinpei (後藤新平), a leading official in the Japanese colonial government at the beginning of the 20th century, said major public buildings in Taiwan should be 'soldiers in civilian clothes,' this was the effect he was aiming for. Through grandeur architecture, Gotō hoped to impress and command the respect of the local population.

The Tainan Watercourse was first proposed in 1897 by W. K. Burton (1856-1899), a Scotsman who made great contributions to public hygiene and water sanitation in both Taiwan and Japan. His Japanese assistant, Yashiro Hamano (濱野彌四郎), was active in Taiwan until 1919, and is credited with designing this particular facility.

It was not until 1912, however, that funds were allocated for the construction of the Watercourse. Within a decade, the British-made filtration system — the first to be installed in Taiwan — was cleansing 450,000 cubic meters of water per day.

Much of the original equipment remains in place. There is a backwash-pressure engine that was used to unclog the filters by blasting water back through them, and benches and cabinets made of cypress wood still stand. The laboratory — which conducted quality control checks and added alum and soda ash to the water — is also open to visitors.

Makers' plaques can be found on several of the machines. Some have been polished by time and are almost illegible, but visitors can still read enough to see that Japan imported Western technology to Taiwan in the 1920s. One plaque reads, "E.H. Hunter & Co, Contractors — Osaka, Kobe & London.”

Of the four engines that would pump clean water out of the Watercourse and up to a covered reservoir on a nearby hilltop, three are original. The fourth dates from just after World War II, and bears an unusual stamp of origin: "Yasukawa Electric Mfg. Co. Ltd. — Made in Occupied Japan.”

Several former industrial sites around Taiwan have already been repackaged as tourist attractions or cultural centers, and the Old Watercourse is set to follow suit. The central government has set aside NT$80 million for the renovation of the Watercourse.

The conversion of landmark factories into tourist attractions is a result of the economic shift away from industrial manufacturing, together with a simultaneous growth of interest in traditional culture and local identity. Many of these industrial buildings represent a symbol of history and hold a special place in people's memories.