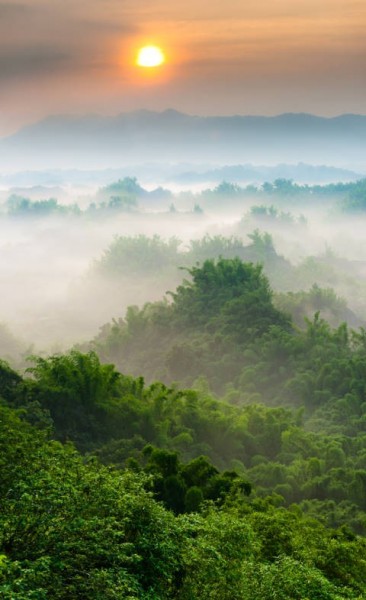 Caoshan Moon World is a chalky badland region tucked in the southern part of Tainan. This outlandish terrain of roughly eroded, razor-sharp ridges and limited vegetation is rarely mentioned in guidebooks because it is relatively hard to get to, but is well worth a visit.

Best known for its glorious sunrises from the vantage points of Erliao Pagoda (二寮觀日亭) and 308 Peak (三0八高地), the region's equally beautiful scenery in the badlands below is often underrated. Visual feasts served up by the unusual combination of light, mist, soil, and jagged vegetation make it a photographer's delight and a nature lover's paradise.

The main route to southern Taiwan's mountains and lucrative camphor forests once passed through these badlands. In the late 1800s, the trip took days on foot and there were marauding bands of bandits.

Today the main route to the interior, Provincial Highway 20, skirts Moon World along with the infrequent farmsteads. Untouched by outside influences for many years, the area has retained its traditional country charm.

It is only recently in the past decade that the region has been developed as a tourist attraction; new pagodas and moon-themed statues have been built, but have quickly fallen into disrepair in the harsh climate, leaving the eerie landscape dotted with derelict pagodas and forsaken statues.

From seabed to mountaintop

Geologically, the area is characterized by a 1.5-kilometer-thick Touke Stratum (頭嵙山層), which is thought to have been created in the Pliocene and early Pleistocene eras. The thicker top layer of the stratum is a cement-sandstone hybrid with the occasional siltstone; the lower layer is mainly sandstone with siltstone and shales of varying quantities thrown into the mix.

It is the different erosion rates between these two strata that cause the formation of the hogback ridges — i.e. steep main ridges with lesser perpendicular ridges falling to the sides — that are typical of the area.

Originally formed as ocean floor sediment, this stratum was exposed as the Philippine and Eurasian plates converged to form Taiwan's mountains; nowadays, the soil is so saline that white salty crystals often form on the surface. The only vegetation able to grow in such conditions is the drought-tolerant Thorny Bamboo (刺竹), but only in sparse, tenacious clumps.

The seasons of the Moon World

Unchecked by vegetation, natural erosion has created a landscape of barren soil, with the local residents comparing the arid badlands to the landscape of the moon. Yet the Moon World is visually striking. Different times of the day and different seasons have a great impact on the barren landscape, and each has its own appeal.

Beginning in February or March, due to the lack of precipitation and the high saline content of the soil, bamboo leaves begin to turn first yellow, then orange, and finally red, creating spectacular fall-like colors rarely associated with bamboo.

Then comes the sunrise season in Moon World, in which photographers flock to photograph the sun rising over the mist-shrouded badland landscape from the vantage points of Erliao Pagoda and 308 Peak between April and September.

As a general rule of thumb, days after rain will produce ideal conditions for mist. Moisture evaporating from the sun-heated ground forms a low-lying mist that blankets the remarkable landscape, evoking scenes reminiscent of a classical Chinese ink brush painting.

Those who crave a more active adventure can also wander the dirt roads to find hidden jewels such as oases of banana fields encircled by craggy cliffs, brackish ponds, and rivers lined with Thorny Bamboo.

There are always treacherously steep sandstone cliffs to scramble up that can, at times, be quite perilous. It is easy to completely lose one's bearings with the mazes of limestone and gravel cliffs towering above, and the steep hills can encircle and lead into areas that feel alien and otherworldly — therein lies Caoshan Moon World's charm.