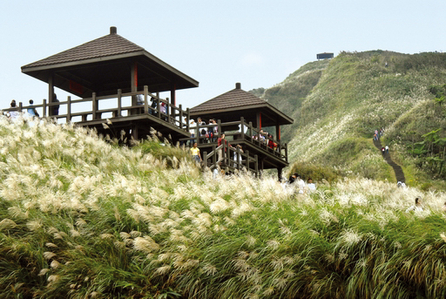 People who travel the costal highway on Taiwan's northeastern coast will be struck by the sublime beauty of the rugged coast and the lofty cliffs along the highway. The northeastern costal highway offers a view of the vast Pacific Ocean on one side, and the grandeur of majestic mountains on the other side. The Caoling Historic Trail above the coastal highway, however, offers a panoramic view of both the sparkling waters and the grassy mountains of the northeast coast.

The Caoling Historic Trail is the remaining section of an ancient route that connected Taipei and Yilan during a time when the only alternative travel plan was sailing on the sea. Measuring 8.5 kilometers in length, the trail climbs over mountains and cuts through northeastern Taiwan to link New Taipei's Gongliao District with Dali District in Yilan County.

The trail has now been refurbished and paved with stepping stones to greet more hikers. The trail is a relatively easy hiking route for the general public and is suitable for travel all year round. Spring and autumn are the preferred times to visit the trail, however, as the transitional seasons offer more comfortable weather for the 3- to 4-hour trip.

Caoling is particularly attractive in late autumn when the silvergrass is in full bloom and the hilly areas of the trail are all covered with the sleek, satiny grass. It appears as if a silver blanket was laid on top of the mountains, lending a special charm to this unique landscape in November.

Since 2001, the one-month Silvergrass Festival is held every November to promote the region, attracting more and more visitors to visit the historic trail each year. The two ends of the trail are at Yuanwangken (遠望坑) in New Taipei City and Dali in Yilan County. Hikers can start their itinerary from either direction, though most people start their trip from the Taipei end and finish in Yilan.

Starting the trip from Yuanwangken means stopping by the Yuanwangken Riverside Park. The location of the riverside park was once a rice field, which was since rebuilt as an ecological park to allow hikers to take a rest or enjoy the scenery. Visitors will be delighted to find the ponds and creeks are rich in biodiversity such as birds, insects, and plants. The ponds are also full of white ginger lilies and their strong attractive fragrance during early fall.

Deeper into the summit, however, the hills soon become dominated by silvergrass, and trees are hardly found anywhere. The hostile environment of the hill makes it difficult for trees to grow, so the land is left to the silvergrass, which is more resistant to the strong northeastern winds in this area during winter. The Chinese phrase 'Caoling' means 'grassy summit,' which is indeed a good description of the trail.

Once on the pinnacle of the slope, visitors can enjoy a watery vista of the Pacific Ocean and the undulating coastline of northeastern Taiwan, as well as a glimpse of the offshore Guishan Island. To entertain hikers during the Silvergrass Festival, local tourism promoters also wear theater costumes and dress up as ancient bandits, soldiers, or waiters to play quiz games and serve hot ginger tea to hikers.

In addition to its unique natural landscape, this ancient trail also has two historic monuments established by garrison commander Liu Ming-teng (劉明燈) during 19th-century Qing Dynasty. Liu first set up a tablet inscribed with the four-character Chinese saying "to banish unruly mists” (雄鎮蠻煙), and then set up another tablet inscribed with the character for "tiger” (虎) out of the traditional belief that tigers can quell the wind spirit.

At the sites of the two ancient tablets, volunteers are stationed to help tourists to make what is called a 'Tuo Bei' (拓碑) — copying the inscription by pressing a sheet of paper on the ink-saturated tablet. Tuo Bei was a traditional practice among literati in the past, and people collected authentic inscriptions from famous tablets as part of their artistic collections.