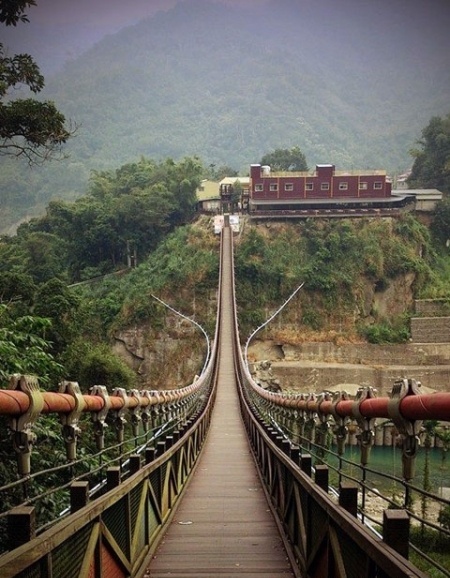 Tanayiku Valley is a lesser-known part of the popular mountaintop destination Alishan. It is located at Saviki Village (山美村), an area known for its efforts to protect its environment. Only about 700 people live permanently in the village, most of whom are from the aboriginal Tsou tribe. The remoteness of the village has historically limited the number of visitors.

Tanayiku Valley was once the main hunting and fishing ground for the Tsou people, who practiced ecological environmentalism. Rivers are very important to the Tsou for their connection to both traditional ceremonies and agriculture, making them a distinctive part of the culture.

The Tanayiku Ecological Nature Park was opened in 1995 in an effort to protect the environment, and it is now home to many cultural attractions such as indigenous dance performances and traditional food. The nature park is becoming a favorite among hikers for its red-, black-, and blue-colored suspension bridge, touted as the longest in Taiwan. The suspension bridge also offers a great view of a two-storey pavilion decorated in traditional Tsou designs that sits among the magnificent natural rock formations and sloping hills.

The rare scenes, whether natural or cultural, help preserve a sacred land and a way of life while introducing them to the general public to build awareness and appreciation for precious natural resources and cultural heritage.

Saviki Village faces problems similar to those of other indigenous towns in Taiwan. Poor economic conditions have led to an outflux of young people seeking better wages in the cities, and human activities such as over-farming, deforestation, over-hunting, and pollution have devastated both biodiversity and the soil. Destructive fishing techniques that use poisons and explosives have only added to the damage to the sacred lands.

The Tanayiku Ecological Nature Park has helped. Not only does it protect the environment of the area, it has helped the local economy and allowed many residents to stay at home to make a living.

In the 1980s, village leader Kao Zheng-sheng (高正勝) saw a chance for recovery. In Tsou culture, all of the rivers in Tanayiku are owned by several families, with specific boundaries that designate what belongs to whom. If another group wants to use a basin belonging to someone else, its members must present three wild boars as an offering. Kao and other village elders decided to visit the river owners one by one to convince them to offer usage rights in the basins to restore the ruined rivers.

Together, the Saviki community built a safe home for the Ku Fish (Onychostoma alticorpus) of the valley. They managed to bring the endangered fish from source steams to the river, allowing it to re-flourish in the valley's pristine environment.

Today, the best time to view the endemic species is in November, when the Ku Fish Festival offers exhibitions on Tsou culture, agricultural products, and indigenous handicrafts as well as traditional chorus music, hunting activities, and dance performances.