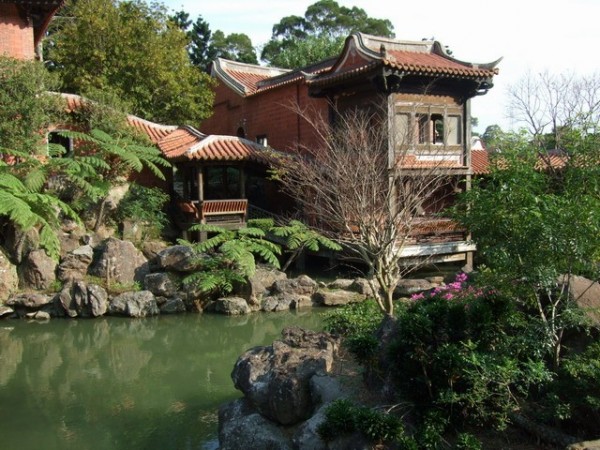 Nan Yuan, which stands for South Garden, is a beautifully designed resort with Jiangnan-style architecture and Chinese-landscape gardens in Hsinchu County. For many years it was a very exclusive area for the use of top-echelon management of the United Daily News (UDN) Group and foreign dignitaries from far and wide. In recent years, however, the architectural gem has reopened as a resort for the general public under the management of a Taiwanese restaurant chain.

Han Pao-the (漢寶德), one of Taiwan's top architects and an expert in traditional architecture, began to build Nan Yuan in 1983, drawing inspiration from the architecture found in the Chinese region of Jiangnan, the area south of the Yangtze River.

The dream project, which took just two years to finish, had no budgetary constraint. Han, who was not required to present an architectural blueprint of Nan Yuan at the outset, just reported regularly to the late Wang Ti-wu (王惕吾), founder of the United Daily News, on its progress.

The famous architect selected the best artisans and carvers in Taiwan, trusting them in their fields of expertise to realize his vision of Nan Yuan. Although the basic structure was conceived beforehand, Han allowed the competitive team of builders to flesh out the details, especially that of the interior parts of the buildings.

The durable Chinese cypress, or juniper, was used to build the bulk of Nan Yuan. As the Japanese demand for such wood had depleted the local resources many years ago, the project had to rely on similar wood imported from neighboring Southeast Asian countries.

A scroll painting titled "Pavilion” (阿閣圖) by Sung Dynasty painter Zhao Boju (趙伯駒) served as point of departure in the design of Nan Yuan. The painting, which is now part of the Taipei-based National Palace Museum's collection, displays a refined palatial setting that includes pine trees, hills, a pond, and an ornate building topped with azure roof tiles and golden ridges.

When Han learned directly from Wang his intention to turn Nan Yuan into his personal residence, he also worked on a two-storey main building, ever keeping an eye on maintaining good "feng shui.”

Carefully designed with Wang's children in mind, the buildings are made up of different functional units and linked to create a dragon-like formation. Completing the picturesque setting is a waterfall at the back of the two-story main building, from which water flows down into ponds below, and black swans swim gracefully in one of them.

Although the late Wang never really lived there, Nan Yuan served as his resort for entertaining family and friends for over two decades. The late British Prime Minister Margaret Thatcher and the ex-Soviet Union leader Mikhail Gorbachev were among the foreign dignitaries who were entertained here.

Today, Nan Yuan occupies a piece of land measuring 27 hectares. But the buildings, including 20 rooms to accommodate guests overnight, occupy only 2 hectares. The remaining landscaped areas are ideal for a leisurely stroll.

Nan Yuan welcomes visitors year round. Peach blossoms are in bloom in March. In May the paulownia flowers cover trees like snow, and the sweet smell of osmanthus fills the air in season.

Visitors nowadays drop by mostly to admire the ornate Jiangnan-style architecture. Entrance fees differ for guided tours and travel packages that include meals. Afternoon tea and picnic boxes are also available on order.