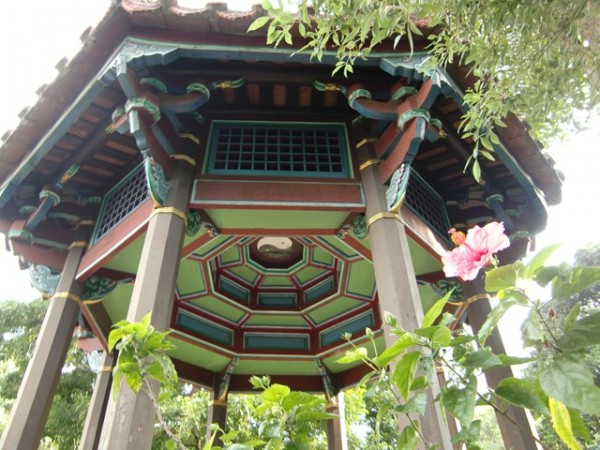 The Lin Family Mansion and Garden, or Linbenyuan Residence, in New Taipei City's Banqiao District will transport visitors back to an island of elegance and quiet that stands in stark contrast to the urban frenzy just outside its walls.

The Lin Mansion is not particularly old — it was constructed largely during the period from 1847 to 1895 — but it is interesting to see the care that is being lavished on it and the obvious pride that the local community take in preserving a bit of the past.

The story of the Lin family in Taiwan actually begins in 1778, when Lin Ying-yin (林應寅) moved from China's Fujian Province to what is now Xinzhuang District in New Taipei City. He was joined by his son Lin Ping-hou (林平侯) in 1782, who stayed on to work in a rice-processing factory when his father returned to China in 1785. The younger Lin soon set up his own company transporting rice with a stake from his former boss, getting into the business just when the outbreak of a local rebellion caused the price of rice to skyrocket.

Lin prospered and further expanded his range of operations by going into the salt business. By the time he was forty he had amassed considerable wealth. He sired a total of five sons who were all given a portion of his business under a literary label — Yin-Ji, Shui-Ji, Si-Ji, Ben-Ji, and Yuan-Ji, with the first character in each business title forming the Chinese phrase "Yin shui si ben yuan,” which means "when you drink water, be grateful for the source.”

The third and fifth son, who were siblings by the samemother, eventually joined their businesses to form "Lin-ben-yuan,” which became the name of the Banqiao residence and the moniker for their wealthy and influential clan.

Rise and fall of the Lin clan

Under the leadership of the two brothers, the Lin clan moved to Banqiao District in 1851. The Three-Courtyard House, which is the oldest building still standing within the walls of the Lin Garden now, was built between 1851 and 1854. It was designed with privacy and security among its top priorities, with limited access, solid walls, and geomantic features like a half-moon pond in front to serve as a mirror and a hill behind the house to offer defense against outsiders.

By 1878, the family was busy developing the area next to the Three-Courtyard House, constructing a larger Five-Courtyard House that was used to entertain honored guests such as Liu Ming-chuan (劉銘傳), who called on the Lin family for help during his tenure as Governor of Taiwan Province.

As the clan's influence and size grew, they began to construct even more delicate and well-designed buildings. These were used for libraries and study rooms, reception areas for guests, small pavilions for performances by actors and musicians, and quiet areas for viewing the moon, fishing in the deep ponds, and admiring the huge rocks that were reminiscent of the mountains of the Lin ancestral home in Fujian.

Unfortunately, the rise of the Lin family was stunted by China's ceding of Taiwan to Japan in 1895. Much of the Lin clan were scattered across Taiwan, and the garden gradually suffered from increasing neglect. The final blow came in 1949 with the influx of soldiers and citizens fleeing Communist China; an estimated 300 families are said to have occupied the Lin complex at that time.

Squatters and disuse led many of the fine buildings in the garden to fall prey to pests and rot until 1977, when the Lin clan ceded ownership to the New Taipei City government, but reserving for itself the right to use the original Three-Courtyard House.

Reconstruction and restoration work began in 1982 under the leadership of architect Han Pao-teh, and still continues today. It is refreshing to see how the local community is working to slowly restore the grandeur and majesty that earned the Lin Mansion a reputation not only as one of the finest residences in Taiwan, but one of the few remaining examples of classic Qing Dynasty architecture.