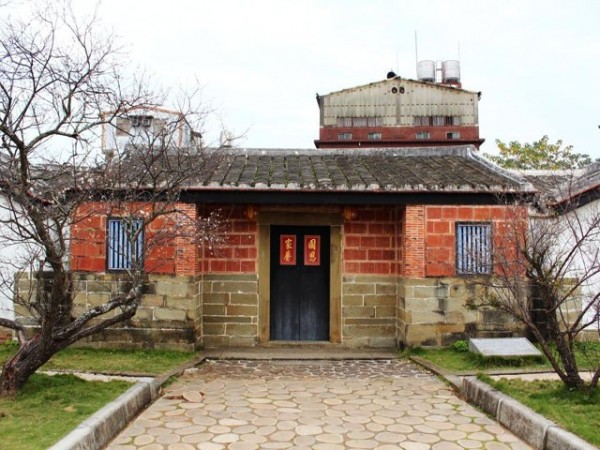 As the headquarters of the Jinguangfu Land Reclamation Company during the imperial Qing Dynasty, the Jinguangfu Mansion served as the base of operations for land development in the mountainous regions of present-day Hsinchu County.

Its name comprises of three elements — "jin” for gold and prosperity, "guang” for Guangdong Province, and "fu” for Fujian Province.

During the imperial Qing Dynasty, Taiwan's abundance of natural resources brought an influx of immigrants across the Taiwan Strait. Ethnic conflicts erupted from time to time, mostly between people from different areas of China, between the Fukienese and Hakka settlers, or simply between people of different surnames engaged in feuds over the rights to various territories. There were also attacks by aboriginal natives of the island.

In 1934, Tamsui Governor Lee Szu-yen (李嗣鄴) commissioned land development expert Chiang Hsiu-luan (姜秀鑾), a Hakka, to venture into the remote Hsinchu mountains. To set up barracks against assails by the aboriginal natives, Chiang built 15 redoubts and hired mercenaries to fortify the defense on hillsides in the area.

With Chiang and Chou as head representatives of their respective ethnic party, development of the Jinguangfu company went smoothly with cooperation from both groups of people. Chiang led hundreds of tenant-farmers who were Fukienese and Hakka in building 36 redoubts in the region and establishing a large-scale defensive line.

The productive co-op venture in land development and crop cultivation lasted 52 years, with the majority control falling into the hands of Chiang's descendants after the Fukienese settlers sold their shares. Jinguangfu fell into disuse, however, after the government altered its land taxation policies.

The 1935 Hsinchu-Taichung earthquake, which was of 7.1 magnitude, destroyed the original Jinguangfu building. It was repaired and became a mixture of traditional Taiwanese and Japanese building styles; the majority of the building was then used as a barn following the repairs.

The 921 earthquake that hit Taiwan in 1999 was the second-deadliest quake in Taiwan's recorded history after the 1935 Hsinchu-Taichung earthquake. After the Jinguangfu complex was destroyed by the second earthquake, the Ministry of the Interior immediately authorized urgent repairs that included a new foundation to support the building. The descendants of Chiang Hsiu-luan were tasked with conducting the repair and maintenance of the site; reconstruction began in 2001 and was finished in April 2003.

Symbol of the pioneering spirit

In its nearly 200 years of history, Jinguangfu was first a command center established for defending tenant-farmers against raids from the aborigines who lived in the highlands. It was also an office for recruiting farmers and handling payments from tenants.

Jinguangfu was also used as a police bureau by the Japanese authorities during their colonization of Taiwan. It received designation as a National Monument in 1983, and remains the property of the Chiang family, many of whom still dwell within the complex's quarters.

The restored Jinguangfu retains its original "san-ho-yuan” structure, which is a traditional one-story Chinese building with a central building and a perpendicular wing on either side. The structure is simple and concise, and the walls are made of flagstone decorated with pottery clay and fitted with openings for defense.

Today, Jinguangfu represents the spirit of pioneering and cooperation of the Fukienese and Hakka immigrants who braved the dangers of land development and played an important role in the development of Hsinchu. It is a symbol of integration between different ethnic groups and also stands as a witness to the saga of land reclamation and development in Taiwan's history.