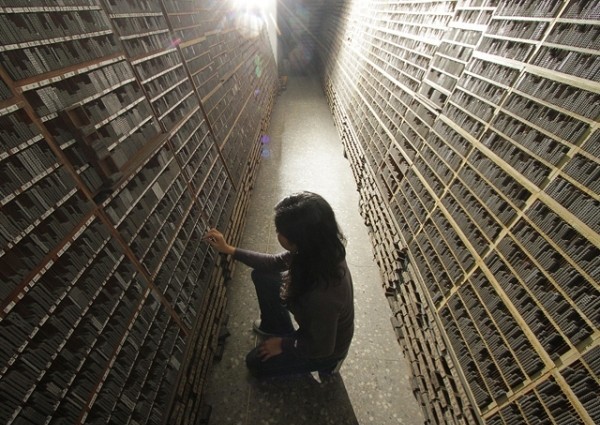 Sixteen-year-old Chang Chieh-kuan (張介冠) started Ri Xing Type Foundry with his father in 1969. Half a century later, the Taipei foundry is home to a rare collection of the traditional Chinese character matrix, one of the few remaining in the world.

There were once as many as 30 employees working in the foundry during its peak years. In the past ten years or so, however, Chang and his wife have run the business all by themselves, calling it a social responsibility to keep it alive, and to preserve it for Taiwan as a whole.

The foundry currently holds about 300 thousand lead stamps in stock, of which the majority are devoted to 3 thousand commonly used Chinese characters. People often come here to buy individual lead stamps that spell out their names, and use them as personal chops.

Chang has also initiated the Ri Xing Letterpress Rehabilitation Project to preserve movable type printing. Training sessions are held on Saturday mornings to show participants the different aspects and duties of a foundry, such as the casting of type, maintenance of typecasting machines and copper matrixes, typesetting, and other specialized skills.

There are various simple things to teach, such as understanding how the shelves are arranged, which are the commonly or rarely used characters, and how to grab type from the type shelves without knocking them all over the floor.

Monthly meetings are held on Saturday afternoons for participants to get together and talk about what has been achieved and what problems have incurred. Volunteers, who usually work in front of their computers to visually amend the shape of characters, meet up with those who help out in the type foundry.

Major steps in the rehabilitation project include the preservation of what Ri Xing has on hand, especially the calligraphic font "Kaishu”(楷書), an elegant style of calligraphy that dates back to approximately 2,000 years ago and a personal favorite of the late president Chiang Kai-shek.

There is also considerable effort going into modifying the font digitally, with the aim of producing new molds in the future, since the ones at Ri Xing are understandably blemished after four decades of use.

In traditional Chinese, many characters share the same radical. For lead types, the radical is slightly different in each and every character, while in computerized fonts there are maybe two or three choices of the radical for all of the characters.

For foundry owner Chang, the beauty of characters lies in every stroke, and in the way they are in harmony with each other. The main difference is that lead type came from molds made upon the basis of calligraphy and were produced one by one, whereas modern computerized fonts are assembled mechanically from a combination of pre-drawn strokes.

Chang cites "hu” (互), the Chinese character for reciprocity, as an example. In calligraphy the character resembles a handshake, but in computerized fonts the strokes overlap and "stab into each other,” thus losing the meaning of the original word.

In comparing Kaishu-style lead type and computerized fonts, Chang said it is not about which one is more beautiful than the other, but about finding a better way to present the characters.

So this is what makes Ri Xing an interactive museum of movable-type printing. Visitors do not just view static displays; they get to experience printing on their own, and to see the uniqueness and aesthetics of traditional Chinese characters.