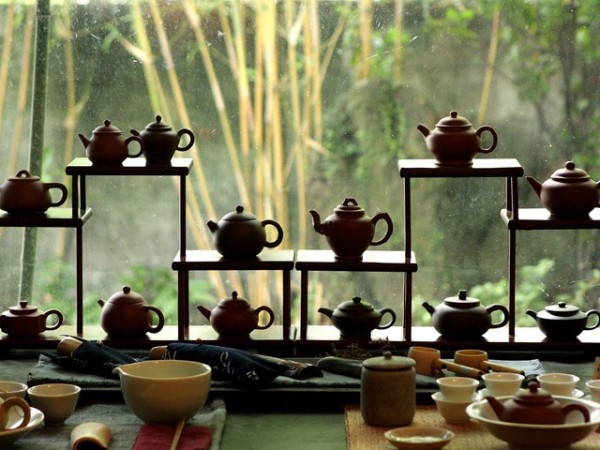 Wistaria Tea House was once where democracy advocates gathered to share their dreams and ambitions during the 1970s when Taiwan was under the rule of martial law. But these days, everyone is welcome to pay a visit, have a pot of tea, and enjoy its meditative surroundings.

The story of the Wistaria House is inseparable from one man — Chow Yu (周渝), the youngest son of the house's previous tenant David Chow (周德偉). Serving as the R.O.C. Director-General of Customs, the senior Chow was offered the residence in 1950 by the government and moved in with his family. This was 30 years after the former Japanese colonial government built the compound as living quarters for its expatriate naval personnel in 1920.

As the son of a man who not only served as the country's top customs official but was also a highly esteemed economist and advocate for Western liberalism, Chow was able to share in many of the valuable moments when his father exchanged views or debated with visiting intellectuals, many of whom were respected scholars in Taiwan of the day, over topics ranging from philosophy to contemporary issues.

By hosting informal talks with intellectuals at home, the hospitable David Chow initiated a trend for frank discussions during a restrictive era. Some people even used the place as a temporary shelter when they were under financial duress or as free accommodation on occasional visits to Taipei.

The early visitors who frequented Westeria House included certain names that were later involved in the 1979 Formosa Incident (美麗島事件), a political crackdown that served as the watershed of Taiwan's democratization. The younger Chow himself also wrote an article that protested the government's suppression of Taiwan's grassroots efforts.

"Wistaria House was the most beautiful fortress in the memory of all of the participants in Taiwan's democratization movement,” noted Sisy Chen (陳文茜), an active political commentator in Taiwan who joined the civic movement in the 1980s.

Wistaria Tea House opened in 1981, a period when Taiwan was on its way towards economic and social liberalization and when most people preferred visiting trendy American or Japanese cafés on their weekends.

The custom of drinking Chinese tea was viewed as out of date and existed only in childhood memories of their fathers or grandfathers — old-timers who would spend an afternoon in a humble Chinese tearoom where the main attraction for most visitors was a daily story-telling performance rather than high-quality tea.

Promoting the tea-drinking culture was not initially a part of Chow's vision either. The teahouse came about as a result of his friends' suggestions that he should make a living, more or less, from receiving guests at home, which Chow had already done for years since he took up the 200-ping (661.14-square-meter) compound in 1975 following his father's retirement and relocation to the United States.

Nevertheless, the culture he has created at Wistaria Tea House invites every visitor to find meaning and vitality, even in inanimate objects. He believes that in the world of tea, things are not merely utensils, but are endowed with a certain spirituality, and given their own disposition and aesthetic.

Declared a historical site by the Taipei City government in 1997 because of its historical and cultural significance, the Wistaria House has won considerable international media coverage and remains one of the most popular spots for tourists to experience authentic tea culture when they visit Taiwan.

Greeted by soft classical Chinese music, tatami mats, clay pots, and kerosene water boilers, visitors are welcomed to immerse themselves in the centuries-old ritual of preparing tea under the eponymous purple Wistaria blossoms.