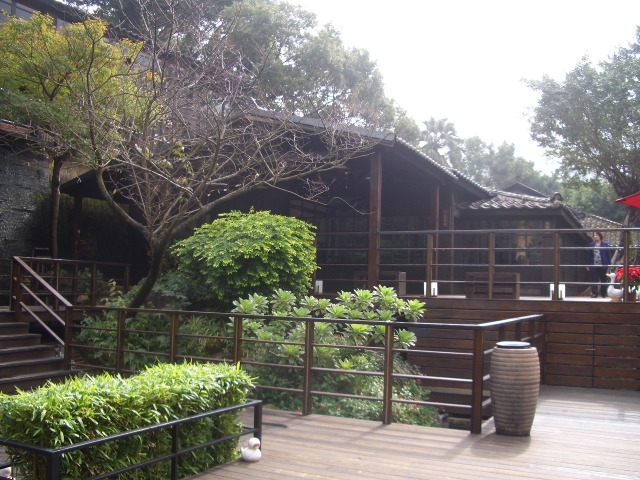 The Marshal Zen Garden, also known as the former residence of Chinese Marshal Zhang Xue-liang (張學良), is one of the lesser-known Japanese-style buildings in Taipei's Beitou area. The Marshal Zen Garden is now maintained by a corporation and used as a restaurant, but it still maintains its original appearance and offers an elegant and peaceful setting for dining.

The complex entered service in the 1920s, and for a while was used mostly to keep "comfort women” and to entertain Japanese kamikaze pilots who were about to embark on their suicide missions. After Japan's defeat in World War II and the relocation of the Republic of China government to Taiwan, General Chiang Kai-shek confined Marshal Zhang and his second wife Zhao Yi-di here in the 1960s, as punishment for Zhang's role in kidnapping Chiang in the Xi'an Incident of 1936.

Born in 1901, Zhang was the eldest son of Zhang Zuo-lin (張作霖), the effective ruler of Manchuria in northeast China during the early 20th century. He succeeded his father's warlord position from an early age and was nicknamed the "Young Marshal.” He pledged his allegiance to the Kuomingtang in 1928 and was originally a close ally of Chiang's, but the latter never forgave the Young Marshal for the kidnapping.

Under Chiang's rule, Zhang was kept under close surveillance and house arrest for over fifty years. Famous anecdotes tell of the exchange of presents loaded with banter between the two friendly foes. Zhang is believed to have given General Chiang a clock to kindly remind him of the passing of time; in return, Zhang received a fishing pole, a symbol of patience in Chinese lore.

Zhang was released from his confinement after Chiang passed away, and he eventually left for Hawaii, where he was buried at the age of 100 in 2001. The Beitou complex was then converted into a restaurant called the 'Zen Garden' but the owner did not have a large enough budget to maintain the languishing 4,300-square-meter area. In 2010, a corporation took over the property and spent more than NT$50 million restoring it to its former glory and rebuilding the brand as the 'Marshal Zen Garden.'

Steel was used to reinforce the foundation and some of the original interior wooden pillars had to be replaced. However, the complex and its surrounding gardens remain largely the same as before, with the exterior of the building encompassing a large open area dotted with old Banyan trees and Taiwan cherry trees.

The historic building and the tree-lined garden have a timeless quality. The Marshal Zen Garden is situated on a hill, providing visitors with a view of the Thermal Valley (地熱谷) and even Guanyin Mountain (觀音山) on sunny days, while the interior features simple wooden furniture that fits in with the wooden pillars and floor. Visitors can admire the view outside through large glass windows and enjoy their meals at the same time.

The dishes offered in the restaurant were developed with a nod to Zhang's daily diet. Since Zhang grew up in a rich warlord's family in northeast China, the restaurant chefs came up with dishes based on their studies of his diet in his younger years to offer their customers various seasonal dishes. Many Chinese medicinal herbs and ingredients are used to reflect Zhang's longevity.

Visitors will be able to tour the original living room and a memorial statue of the Young Marshal. A brick house next to the main building that once served as a shack for guards monitoring Zhang has since been transformed into a tea house. There is also a shallow hot spring pool for soaking feet, as well as private hot spring rooms, as the marshal is said to have soak in hot springs regularly to maintain good health.

The Marshal Zen Garden connects today's visitors with the story of Japan's occupation of Taiwan decades ago, and sheds light on the relationship between General Chiang and Marshal Zhang. It also serves as an informal tribute to Zhang for his role in history, particularly in regards to the Xi'an Incident that led to the Nationalist victory against imperial Japan.