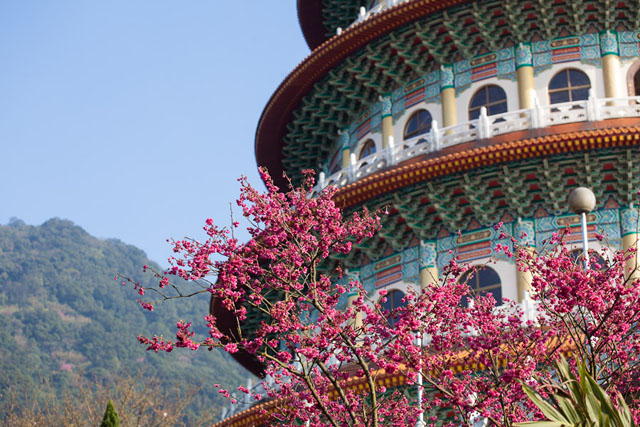 Depending on the weather, cherry blossoms around Taiwan begin blooming towards the end of February and the blooming season is usually over by the beginning of April. One very popular flower-viewing location in the north lies just outside the coastal town of Tamsui. The Tian Yuan Temple can be found on the northwest side of Yangmingshan National Park and is usually one of the later blooming sites for cherry blossoms.

Unlike the majority of temples in Taiwan, the main hall here is inside a large, round pagoda-type building with multiple levels open to all visitors. Also known as the Temple of Heaven, it's open every day from 10amuntil 5pm, although the garden grounds can be visited at any time.

There are several different species of trees in the prunus genus that produce cherry blossoms. The prunus genus includes plum, cherry, peach, apricot, and almond trees, with over 430 different species found throughout the temperate regions of the northern hemisphere. Many varieties that produce cherry blossoms have been cultivated for ornamental and decorative use and do not produce any edible fruit.

At the Tian Yuan Temple, most of the cherry blossom trees are of the yoshino variety. First cultivated in the Edo period in Japan (1603 - 1867) and introduced to Taiwan during the early 20th century, the flowers consist of five petals and their colors range from white to pale and bright pink. Experts suggest that the phenomenon of celebrating cherry blossoms during springtime is influenced by the Japanese culture, even though it's been over 70 years since the Japanese colonial period ended.

Embarking on a trip to see the cherry blossoms is an extremely popular activity and deservedly so. The bright colors lend an air of peace and tranquility to the surrounding environment. It isn't often that one gets the opportunity to wander under little clouds of pink and white flowers. Such is the experience that attracts people to go soak in the atmosphere of the cherry blossoms at the Tian Yuan Temple.