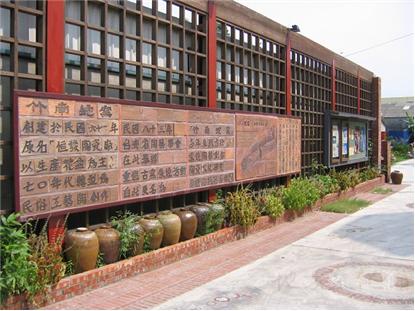 Once ubiquitous throughout Taiwan, the art of Snake Kiln-fired pottery found itself on the verge of extinction by the 1970s. One family, however, has worked unceasingly to make sure that the exquisite art is preserved and passed on to the next generation.

What are Snake Kilns?

The Snake Kiln was introduced to Taiwan by Minnan immigrants during the early part of the imperial Qing Dynasty (1644-1911) and soon became the source of almost all the pottery products in everyday life for about three hundred years.

Although the name conjures up the image of a twisting snake, Snake Kilns are long and straight, without separation in the center, and usually built into the slopes of hills. While the structure resembles a Chinese fire dragon from afar, the term 'dragon' was reserved only for the royal court and was not permitted for the kilns run by the private sector, so the latter were instead called 'Snake Kilns.'

Nine men and an ox

Lin Tien-fu (林添福), founder of the Jhu-nan Snake Kiln in western Taiwan, and his son Lin Jui-hwa (林瑞華) have combined two generations of Snake Kiln knowledge to transform the traditional industry into a high art form fit for the most seasoned collectors.

The elder Lin, who was born in Taichung City in 1926, is often known as Master Tien-fu. He began his career in ceramics at the age of thirteen, serving as an apprentice to artisans in the Chinese province of Fuzhou. Gifted in pottery making, he became a ceramics maker in his own right at the age of fourteen.

During the period of rapid modernization in the 1950s, Taiwan's traditional pottery makers, who focused on practicing a single skill, were quickly rendered obsolete. But Lin was trained and skilled in many aspects of pottery: collecting clay, molding, covering the kiln, firing the kiln, sculpting, and painting.

Instead of accepting the demise of the pottery industry, he rose to the challenge of the changing times and started to invest time in research and development. He created new techniques and began to produce new and varied ceramics — work that was later continued by his son.

The Jhu-nan Snake Kiln was founded in 1972. At the time of its founding, the elder Lin led a crew of nine craftsmen (and an ox), making the molds and bricks himself. It took him and his crew nine days to complete the 23-meter long kiln (today, the kiln has been reduced to 19 meters). The Jhu-nan kiln is one of the few Snake Kilns still in operation in Taiwan.

The Lins specialize in high-temperature ceramics, firing clay in the temperature range of 1,350 to 1,450 degrees Celsius. Very few people in the world, including the 14-generation clan in southern Japan who are famous for their firewood porcelain, deal with temperatures this high.

The effect of the intense heat produces pottery with a natural sheen that is characterized by warmth and thickness. Modern ceramic glazes cannot produce the texture of warmth evident in these colors. The depth and elegance of these colors produces a classic look that withstands the test of time.

The traditional firewood kiln in Taiwan used to be merely as a method for producing porcelain; it was not vested with a standard for determining the beauty of the works, and lacked a methodology for aesthetic expression.

Now that wood-fired ceramics are recognized for their artistic and cultural qualities, the Lins have been instrumental in passing down their specialized knowledge of pottery-making to a new generation.

The Jhu-nan complex not only includes a fully-functional Snake Kiln, it also houses a local museum, hosts pottery-making workshops, and promotes an annual kiln festival. It is also working to replicate many lost prototypes from the past, including the Dog-headed Kiln and the Steamer Kiln, while inventing new kilns of its own.