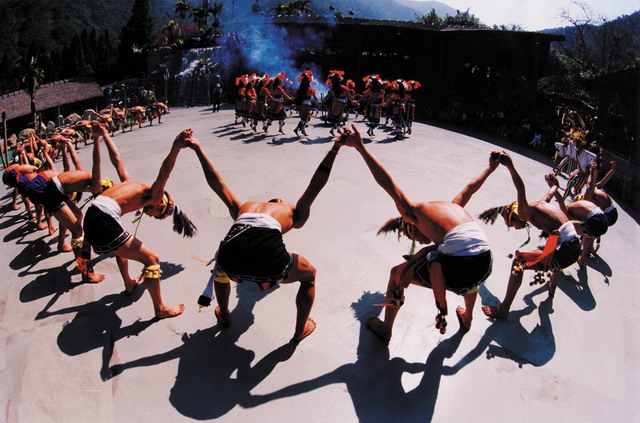 The Formosan Aboriginal Culture Village is Taiwan's first large-scale cultural facility that takes on aboriginal tribes as its main theme. Exciting amusement facilities offer visitors an educational experience as well as entertainment. Situated nearby the famed Sun Moon Lake, the 62-hectare village is also shrouded with pink petals during the cherry blossom season that lasts until the end of March.

Suketaro Chijiwa, a scholar who studied Taiwan's native architecture during the Japanese colonial period, was one of the most important providers of pictures and charts of indigenous housing designs during the construction of the cultural park.

Chijiwa, who first arrived in Taiwan in 1926, visited the indigenous tribes throughout Taiwan from 1930 to 1947, taking tens of hundreds of precious photographs of the native residents and their housings.

Although Chijiiwa had to leave behind his study results after the Japanese occupation of Taiwan ended in 1945, the valued photographs were kept by artist Yen Shui-long (顏水龍), a close friend of Chijiiwa's, for nearly 10 years.

Chijiiwa's photographs and study served as useful references in the major design blueprint for the cultural facility, and the houses seen today in the village have been modeled after authentic houses from up to two hundred years ago.

The village has a very special system in aborigine recruitment. Aboriginal people as young as 15 or 16 can apply to work part-time at the village. They take up courses and undergo training to perform on the stage. Besides performing, these aboriginal employees also have to learn their tribal culture and do research, becoming guides eventually.

Senior aborigines work at the village houses, demonstrating their skilled carving, weaving, and pottery arts to visitors. At the Atayal tribe area, visitors are encouraged to try working on the traditional Atayal weaving loom and make lucky bracelets with natural plant dyes.

Some people are critical of how visitors are drawn to the Formosan Aboriginal Culture Village by its amusement facilities, thinking of it as commercial exploitation ofaboriginal culture. But what they have failed to see is the park's efforts in promoting and preserving aboriginal culture. Young aboriginal employees may stay here only temporarily, but they spread the message about aboriginal culture as they move onto the next stage of their lives.

In the order of their official recognition by the government: