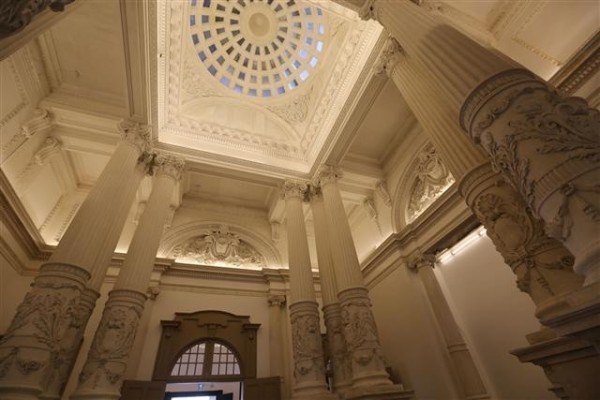 The Tainan Judicial Museum is one of the three classic buildings constructed during the Japanese colonial era. As one of Taiwan's oldest architecture of its kind, the venue has witnessed and preserved the judicial history of Taiwan, including the 1915 Tapani incident. The building has been designated as a National Historic Monument by the Ministry of the Interior in 1991.

The Tainan Judicial Museum was originally the Old Tainan District Court, which was established by the Governor-General of Taiwan after the western judiciary system was introduced to Taiwan during the Japanese colonial period.

After the end of World War II, the Old Tainan District Court had continued to function until it was relocated to Anping District in 2001, leaving the original site to be renovated and transformed into today's Tainan Judicial Museum.

Designed by Japanese architect Takaharu Onogi (小野木孝治), the architecture of the venue applied the mansard roof, which was a popular roofing style in the 19th century. The Japanese authorities had constructed numerous buildings that used this kind of style in Tainan; however, the museum is the only existing building that preserves the mansard roof in Tainan today.

Consisting of two entrances - one of which was designed for the court staff while the other for the general public - the museum is accessible by porches that contain gables, with eight pillars standing on the front porch steps, giving the entrance a sense of solemnity.

The architecture of the museum is complex and magnificent. Among its architectural characteristics, the most celebrated section is the Baroque dome that comprises of eight sides with a small tower on top. The dome is decorated with eight dormer windows to make the building look even livelier.

The years-long transformation of the original courthouse to accommodate the judicial museum has restored the building's original look and style, and provided extra rooms for research and archives. The project was recognized as an outstanding example of a publicly funded restoration, and it went on to win at the 2017 National Cultural Heritage Preservation Awards in the preservation and maintenance category.

Today, the Tainan Judicial Museum has become a new cultural landmark in southern Taiwan. In addition to preserving the memories and history of judicial development in Taiwan, it also serves to promote judicial education and help the public learn more about the judiciary system.