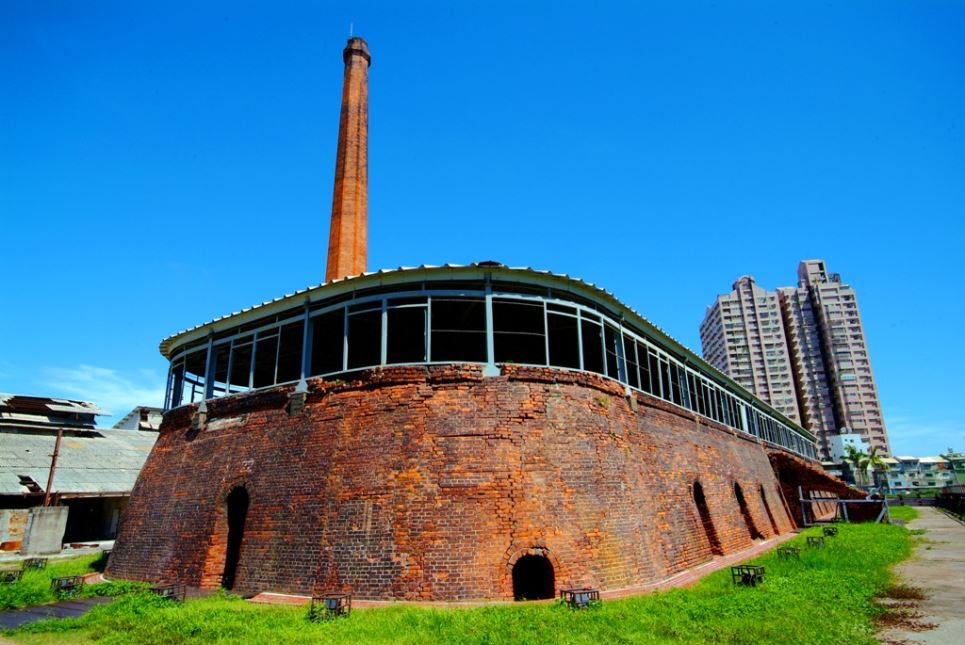 • Name: 台灣煉瓦會社打狗工場-中都唐榮磚窯廠
• Located At: Kaohsiung City
• Year of Establishment: 1899
• Did You Know That …?
Known for its top quality fire-resistant products, the former Tangrong Brick Kiln's bricks were used to construct the boilers of Taiwan's leading companies, such as China Steel, Taiwan Sugar Corporation, and CSBC, Taiwan's largest shipbuilding company, making it one of the four major manufacturers of refractory materials in the nation once.


Built in 1899 and closed in 1985 due to the highly competitive red brick market and the increasing difficulty of obtaining raw materials, the former Tangrong Brick Kiln, the largest of its kind in the nation, has been transformed into a testimony of Taiwan's progression in producing and consuming bricks throughout the 20th century.

The former Tangrong Brick Kiln was originally a tile manufactory called the Samejima Trading Company smelting factory, which had its roots in the first brick kiln in Takao, the city now known as Kaohsiung.

The factory had three traditional "eye kilns (目仔窯)," which were connected to each other to utilize the rising hot air to heat the interior. In 1900, the first prototype of a "steamer kiln (蒸籠窯)" — a Hoffmann kiln consisting of a main fire passage surrounded on each side by several small chambers — was inaugurated in the southern Taiwanese plant.

The Government-General of Taiwan, the governing authority of Taiwan by imperial Japanese rule (1895-1945), had invested 1.3 million Japanese yen (roughly NT$350,000 today) in the establishment of "Taiwan Renga Kaishya," or the Taiwan Brick & Tile Co., integrating the management of brick kilns nationwide under one corporation in 1913. The Samejima Trading Company smelting factory was therefore renamed Taiwan Brick & Tile Co., Kaohsiung Plant.

Taiwan underwent rapid economic growth and had seen an increase in demand for red bricks at that time. To meet the rising market for masonry, six "eight-diagram kilns (八卦窯)" — thermally insulated chambers that were named after their resemblance to the Taoist trigram — were put to work to produce bricks branded TR, meaning "Taiwan Renga."

Known for their superior quality, TR brand bricks were used to construct most of southern Taiwan's notable buildings of the time, including the Takao Provincial Office and Takao Municipal Office, the latter of which is now the Kaohsiung Museum of History.

Instead, kilns that produced fire-resistant bricks were introduced to the plant, bringing the company considerable revenue and making it one of the four major manufacturers of such refractory products in Taiwan.

The plant was renamed the Tang Eng Fire Proof Material Factory in 1980 and was later downsized and integrated into the Tang Eng Stainless Steel Factory, but continued to produce fire-proof materials.

However, owing to factors such as surging wages and increasing environmental awareness, the company ceased factory operations in 1985, but its offices remained in use until August 2002.

The compound, now comprising several well-preserved kilns, chimneys, and a red-brick building formerly used as an administrative office, was named a national heritage site in 2005.

Despite some being covered by vines, the facilities on the site are with diversity in their architectures and designs, exhibiting the cultural rarity and integrity relating to the manufacture of brick — a symbol of traditional culture and pre-industrial technology in Taiwan.