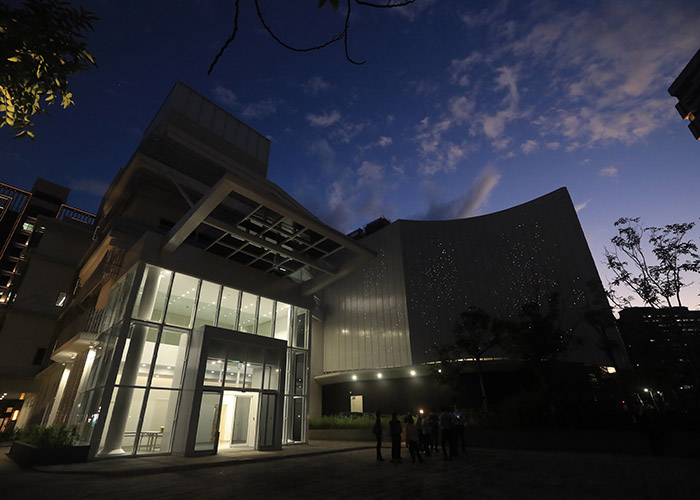 Time of Establishment: Dec. 2021
Location: Xinzhuang, New Taipei City
Did You Know…?
With the cooperation of the New Taipei City Government, the Ministry of Culture is creating the first national-level audiovisual museum and dedicated collection warehouse, to be located in Xinzhuang. The aim of this is twofold—to address the suboptimal setting of the existing national film archive and to boost the development of facilities of the Taiwan Film and Audiovisual Institute. The Xinzhuang Phase 1 building is designed around the concept of "a montage of space and time," symbolizing the future of film and creating a high-tech feel. The building is set to go into trial operations in October 2021, before formally opening in December the same year.

The Taiwan Film and Audiovisual Institute (TFAI) Xinzhuang Phase 1 is being established on public land in the heart of Xinzhuang provided by the New Taipei City Government, which has also been responsible for the construction of the main building. The project is being conducted in cooperation with the Ministry of Culture, which submitted a public construction plan to the central government, sought a budget from the Executive Yuan, handled the interior design and equipment engineering, and collected the professional opinions of experts and scholars.

The TFAI Phase 1 venue contains the institute’s screening room, library, administrative offices, and other spaces. After its opening in 2021, the museum will be managed and operated by the Taiwan Film and Audiovisual Institute.

The institute provides books on film and television, screenings of classic films, and academic exchanges on archiving and restoration. To give something back to the community, special plans have been made to provide benefits, including special rates for registered city residents, film education activities, and discounts on venue rental for charitable events.

The Phase 1 building is designed around the concept of a "montage of space and time," while the outer wall is curved metal, symbolizing the future of cinema and creating a technological feel. The sunshade partition on the façade, meanwhile, symbolizes the flow and sculpting effect of time. Inside are a wealth of facilities, including 200-seat and 50-seat theaters with Dolby Atmos 52-channel and 42-channel setups respectively, making it the highest specifications of domestic cinemas in Taiwan.

This is the only cinema complex in Taiwan equipped for dual projection of 8mm, 16mm and 35mm film. In the future, it will be able to show films collected and preserved by the institute, as well as digitally restored Taiwanese films, helping keep Taiwan’s film and television culture alive.

In addition, the venue also includes a professional video and audio library, permanent and themed exhibitions, and a creative goods and snack store, creating a new home for those who work in the audiovisual realm and a new cultural living space for all.

The Phase 1 venue was awarded the Gold Award in the Best Planning and Design category of the 2019 FIABCI-Taiwan Real Estate Excellence Awards and the New Taipei City Government’s 2020 Public Works Excellence Award.

The development of the TFAI is the result of more than two decades of civil advocacy. On December 10, 2019, the Act for the Establishment of the Taiwan Film and Audiovisual Institute passed its third reading in the Legislative Yuan, with the Ministry of Culture immediately putting into place various preparations for the transformation of the Taiwan Film Institute into the TFAI to strengthen the function of national cultural relics collection and expand the scope of the collection from film to radio and television content.

In the future, the video assets of the collection will be collectively owned by the public, with the scope of restoration work expanded from film to radio and television content. The institute will also continue to promote classic works, to help Taiwan and the world better understand Taiwan's audiovisual heritage. The TFAI expects to grow from a simple archiver to an important hub for research, education, promotion, and reuse of film and audiovisual culture in Taiwan, and to become an important new stronghold for the history of film and audiovisual culture worldwide.

The Ministry of Culture intends to continue working with the TFAI to elevate regional culture, lead the development of surrounding cultural and tourism resources, and lead Taiwan's film and audio culture onto the international stage.