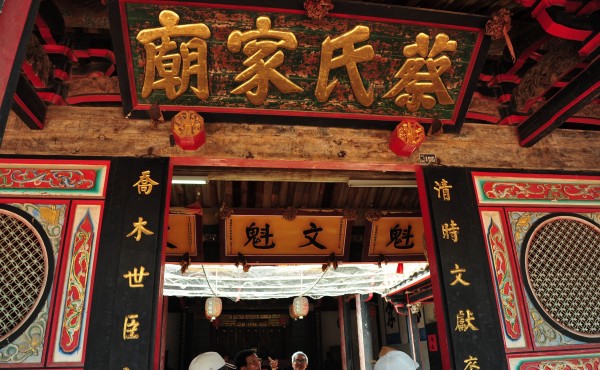 As one of the best-preserved sites out of the 150 remaining settlements in Kinmen, Qionglin Village embodies important tangible and intangible assets of Minnan culture, including architecture, folk culture, and traditional rituals. The settlement was the first of its kind in Kinmen to be registered as a heritage site by the Bureau of Cultural Heritage.

Situated in the center of Kinmen, the settlement was used as an important military base since Song dynasty (960-1679). It was later governed by different dynasties and went through Japanese occupation, war, and martial law to gradually develop into today's historically and culturally rich community.

The village was first developed by the Tsai family, which gradually expanded and became the only lineage in the community. During the Ming and Qing dynasties, the descendants of Tsai served as scholars, generals, or judges for the imperial regime, giving the Tsai lineage the title "Family of Pen and Sword.”

After becoming a prestigious clan in Kinmen, they started building family temples and shrines. Today, the village preserves seven temples and eight shrines for all lineages of Tsai to worship. Among them, the largest one is the Qionglin Tsai Lineage Temple (瓊林蔡氏家廟), which is locally known as the "Big Ancestral House (大祖厝).”

The village also preserves the earliest school in Kinmen - Yi Gu Tang (怡穀堂). Established in 1840, the school started off as an elementary school and later became a community venue for all villagers to study at. After 1949, the school was used as a military counselor's office and later as a nursing house during harvest season.

In addition to historic architecture, the village preserves the Minnan folk culture of ancestral worship. Every spring and autumn, the Qionglin Tsai Lineage Temple holds a ceremony for the descendants of Tsai to worship their ancestors. As the largest event of its kind in Kinmen, the ritual was registered as a folk culture in 2011.

This combination of intangible and tangible cultural heritage, as well as its unique history, makes Qionglin a valuable cultural site. Now under the Kinmen County Government's governance, the site has been selected by the Ministry of Culture's "Reconstruction of Historical Scenes” initiative for reviving and preserving the cultural ecology surrounding each historic site.