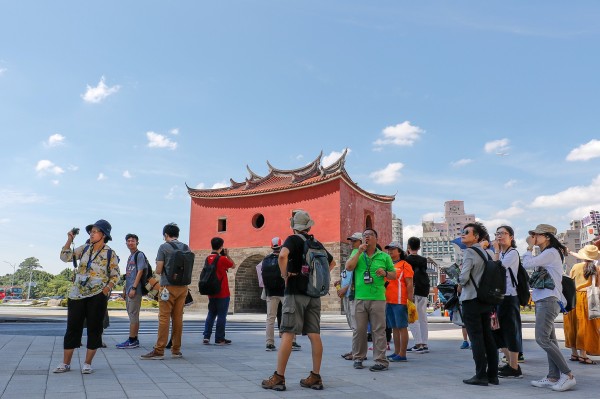 Cheng-En Gate is a historical city gate built by the imperial Qing government. Widely known as the North Gate (Beimen), it is the only gate that preserves its original architectural appearance among the five historical gates of Taipei. It has been designated as a national historical building since 1983.

During the Qing dynasty, the gate served as a main passageway for local residents and government officials traveling from China to enter and leave Taipei Prefecture. As the gate is adjacent to an estuary of Tamsui River, it is also designed to defend against intruders.

The pedestal of Cheng-En Gate is constructed with andesite rocks while the exterior wall is built with red bricks to enclose the interior space completely. The pedestal is also connected all the way to the traditional Fujian-style roof to reinforce structural integrity.

In addition, there are two windows that are smaller than the passage for standing guards. To protect the space in the middle of the gate building, an inner wall was constructed to create a contracture that resembles the Chinese character of "return 回.”

After the retrocession of Taiwan in 1945, the gate was abandoned and began decaying without maintenance. In 1966, the Taipei City Government renovated the other three gates into northern Chinese-style as part of a city-planning scheme that called for tearing down Cheng-En Gate to make way for an overpass project.

Thanks to the heritage preservationists who fought for gate's preservation, the Taipei City Government altered the path of the viaduct instead of having it pass directly through the gate, leaving the site surrounded by the overpass and a ramp.

Following the site's inclusion to a national heritage list in 1983 and major maintenance work in 1998, the government decided to rejuvenate the historic region by starting with demolishing the overpass that had shadowed the gate for nearly four decades in 2013. In 2016, the gate was made accessible to the public again.

Along with the historical Taipei Post Office, Railway Division of Taiwan Governor-General's Bureau of Transportation, and Taipei Railway Workshop in western Taipei, the gate is now an important cultural landmark that has witnessed regime changes such as the Qing dynasty and Japanese colonial era, as well as the trajectory of Taiwan from post-WWII to the 21st century.