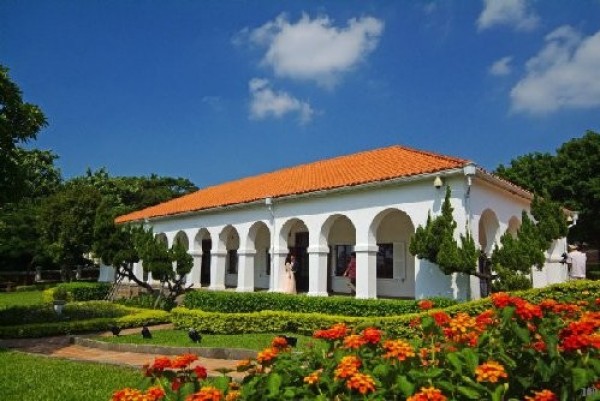 Among the lesser-known attractions in New Taipei City's Tamsui District is the Tamsui Customs Officer's Office, located near the renowned Fort San Domingo. Better known as the Little White House, the place is nicknamed after the building's pure white exterior. Sitting on the edge of a hill, the Little White House was built, along with two other structures, between 1866 and 1875 to serve as the residence and headquarters for foreign customs officers in Tamsui during the imperial Qing Dynasty; the Little White House is the last remaining of the three buildings.

Though the exact date of its construction is disputed, the Little White House is deemed a significant cultural asset of the Tamsui District, as it serves as a reminder of northern Taiwan's crucial role in trade in Asia during the 1800s. At first, all international trade involving Taiwan went through customs in the Chinese province of Fujian. In 1859, however, under conditions stated in treaties between the Qing Empire and international super powers, a customs office was established in Tamsui. Supervised by British officials, the international customs office handled both the import and export of goods. Massive amounts of tea, camphor, and sugar were among the most popular goods being exported from Taiwan that time.

Both the history of the structure and the architecture itself are of cultural significance. The corridor-style house is in the form of a bungalow, with a Victorian-style red-tiled roof and a vaulted arcade that is of Indian origin. This type of so-called 'colonial architecture' was commonly seen in the 19th century, when the practice of mingling architectural concepts from the colonists and the indigenous cultures was widespread. In this case, the supervising British customs officials incorporated many elements from the Commonwealth realms.

Despite its historic significance, the Little White House was not always as deeply appreciated as it is now. When the tariff business was eliminated after the imposition of Japanese rule, the house fell into disuse. In 1996, the local government planned to demolish it so new construction could proceed on the same site; this attracted the attention of scholars and the local community, and a 'Preserving the Little White House' campaign was launched in order to express the residents' intent to conserve the historic building.

Heritage lovers island-wide soon added their voices to the campaign, and the appeal finally reached the Ministry of the Interior, which recognized the historic, cultural, and aesthetic value of the building. As a result, the Little White House and the surrounding area were categorized as a level-three historic site, underwent extensive renovations, and finally re-opened to the public in November 2005.

Today, the Little White House is an historical museum with an elegant Western-style front garden and backyard. Its location provides a perfect view of the Tamsui River and Guanyin Mountain on the opposite shore when the skies are clear. When it rains, a mist lingers in the air, and time seems to stand still. With its unique beauty, the venue has become a popular tourist destination and a common place to shoot wedding photos.

Among all the flourishing flora in the impeccably-kept garden grounds, one specimen in particular is worth annotating — the plumeria (雞蛋樹). A flowering tree native to South America, Mexico, and the Caribbean, the plumeria often accompanied the buildings of foreign officers and businesses in colonial Taiwan, thus giving rise to the exotic connotations of its whitish-yellow petals.

Overall, the Little White House will not disappoint visitors with its rich historic content. For both local and international tourists alike, the soothing atmosphere of the building and its vast outdoor green area provide a great escape from the buzz of city life. Moreover, the museum provides interpreters and cultural guides to help visitors bond with the Little White House and its longstanding history. Four Mandarin tours are held per day, while reservations may be made for cultural tours conducted in English and Japanese.