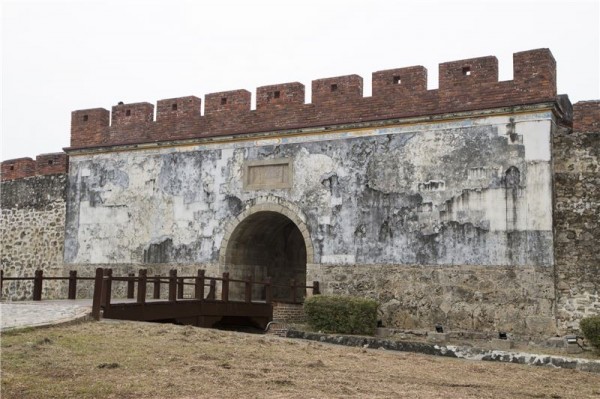 The Old City of Fengshan County is an ancient fortified city built to defend against rioters during the Qing dynasty. As the first city of its kind in Taiwan, the site preserves unique Chinese architectural and cultural elements such as portraits of the two guardian gods at the entrance, a Tu Di Gong shrine, and a city moat. It has been designated as a national historic monument in 1985 by the Ministry of the Interior.

Choosing Zuoying District for its superior military and defensive advantages, the Qing government established Fengshan County in Hsinglungchuang, which is today's Old City of Fengshan County, making the region the earliest urban development project in Kaohsiung.

The old city was originally built of mud to fend off military rioters in Kaohsiung. However, an anti-Qing rebellion led by Lin Shuan-wen (林爽文) stormed the city in 1786, forcing residents to move out. After a spate of more civilian riots, the Qing government was left no choice but to rebuild the devastated city, turning it into the island's first stone-walled city.

Constructed with coral stone, concrete, and granite, the Old City of Fengshan County was a grand architectural achievement comprising east, west, north, and south gates, a moat, and stone walls. During the Qing dynasty, there were government offices, temples, and shrines as well as six main streets inside the city.

The outer walls of the Old City of Fengshan County were equipped with doors that tapered inwards to heighten the city's defensive capabilities. Each city gate was also crowned with nine battlements that had crenels, or rectangular indentations for the launch of arrows or other projectiles. Moreover, small apertures were placed between each crenel for observing activity outside the city walls.

The East Gate was fortified with a moat that drew water from the Tsao-Kung Canal, which was one of the earliest man-made irrigation systems in southern Taiwan. As the canal was supplied water by the Lotus Pond, the moat became known as "Turtle Head Waterway" after the Turtle Head Crag that sits across Lotus Pond. The moat’s piers were then optimized with six facets to facilitate water flow.

The Old City of Fengshan County was also furnished with an extensive drainage system that pumped out waste water through sewers underneath the city walls. Three bars of solid granite were placed across the opening of each sewer, which was colloquially known as "water gate," to prevent enemies from accessing the inner city through the drains.

As most residents had moved to the new city of Fengshan after the 1786 riots, the old city remained intact until the Japanese colonial era. In 1940, the Japanese government transformed the region into a military compound, partially demolishing walls between the north, west, and south gates, and relocating all the temples, churches as well as around 50 households, leaving no cultural relics inside.

After the retrocession of Taiwan, the Kaohsiung government also dismantled part of the wall near the north gate. What remains of the old city still stands today. As the site preserves the unique architecture and history of Taiwan, a restoration project of the site began in 1989 and was completed in 1991.

In addition, the Old City of Fengshan County is now a major pillar of the Kaohsiung City Government's Zuoying Old City Plan (左營舊城見城計畫), which will recreate the historic landscapes of the old city and strengthen understanding of local culture by delving into collective memories of the past.