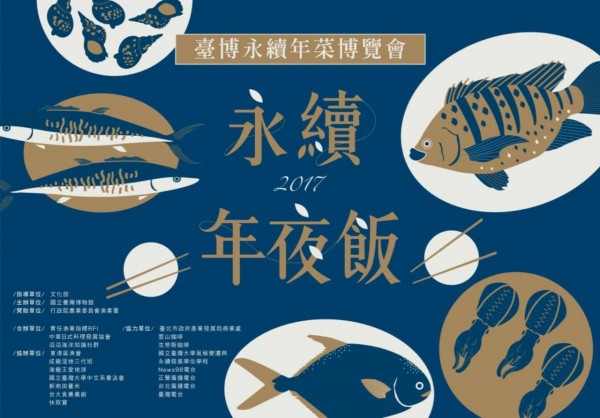 Ahead of the upcoming Chinese New Year of the Rooster, the National Taiwan Museum held the inaugural Sustainable New Year's Food Expo, the first expo oriented towards promoting marine sustainability in Taiwan, on Jan. 14 at the museum's Nanmen Park.

National Taiwan Museum Director Hung Shih-you (洪世佑) noted that the concept of sustainability has been part of the Chinese culture for a long time, as evident in the story of undoing three sides of a four-sided bird-catching net in the 'Records of the Grand Historian (史記).'

Hung added that the Sustainable New Year's Food Expo has invited chefs and experts to share tips in purchasing and cooking a variety of eco-friendly ingredients to meet contemporary demand for delicious cuisine, healthy eating, and a lifestyle of sustainability. As the most important festival of the year, the Chinese New Year can be celebrated without over-depleting the environment, he stated.

Miao Tsu-chang (繆自昌), chief secretary of the Fisheries Agency, explained that he hopes that Taiwan will replace 'seafood culture' with 'marine culture' by using more locally farmed ingredients. For example, the gold pomfret cultivated in box nets is a sustainable substitute for the wild white pomfret, he stated.

Other sustainable items showcased at the expo included mullet, shrimp, Loligo squid, and red sea-bream that are all farmed seafood at a low environmental cost. For instance, the greater squid family comprising members colloquially known as 'small squid,' 'medium squid,' and 'pencil squid' is an abundant offshore resource that mainly live less than one year in the wild.

Moreover, mullet availability was a major incentive for the early Han immigrants to relocate to Taiwan. Hokkien proverbs such as 'mullet cooked with rice noodles, rolling light of gold (烏魚煮米粉，金光搶搶滾),' meaning re-energized by the sight and aroma of the winter delicacy, reveal how the mullet is an integral part of Taiwan's culture.

The lovable rosy shrimp is another regular guest at the Chinese New Year table. However, the number of wild large prawns has dramatically decreased in the recent years while farmed white shrimp have also a considerable impact on the environment. Experts at the expo recommended eco-farmed white shrimp, bred with natural bacteria and algae and without chemical drugs or additives.

Chef Soac Liu of the TLC cooking show 'Joel x Soac' also called on expo-goers to be responsible consumers to ensure that fish will be available for many generations to come. The statement was a nod towards the idiom 'have a plentiful year,' in which the Chinese word 'fish' is homophone for 'aplenty.'

Under Taiwan's RFI program, each certified fish must be clearly traceable, provide quantifiable standards, and be subject to periodic inspection. The production method and process have to comply with local laws and regulations.