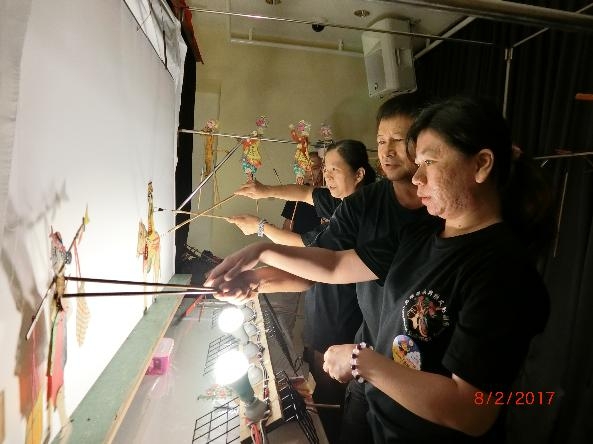 • Name: 永興樂皮影戲團
• Year of Establishment: 1896
• Founder: Chang Li (張利)
• Site: https://www.facebook.com/YSLST
• Did You Know That …?
• The phrase "always happy and joyful (永遠高興快樂)" is the origin and play on words for the naming of Yung Shing Le Shadow Puppet Theatre Troupe. The troupe has been passed down for five generations and is still working hard to preserve traditional Taiwanese shadow puppetry.


Yung Shing Le Shadow Puppet Theatre Troupe is a classic family theater company. It was first established by Chang Li (張利) in Kaohsiung's Mituo District with no permanent group name, and it was simply called after its place of origin. Later on, second-generation troupe leader Chang Wan (張晚) inherited his father's business and named it "Yung Shing Le." The third-generation members of the family were Chang Wan's sons Chang Zuo (張做) and Chang Sui (張歲), who complemented each other and their performances were well-received across town as they began making a name for themselves.

Fourth-generation operations were led by brother-sister duo Chang Xin-guo (張新國) and Chang Ying-jiao (張英嬌), whom were both committed to preserving and promoting shadow puppetry culture. They eagerly held performances on school campuses, cultural institutions, department stores, and temple festivals, and even got invited to perform at international art festivals. In 2017, Chang Xin-guo was recognized by the 24th Global Chinese Culture & Arts Awards (全球華人薪傳獎) in Taiwan, and then by the Kaohsiung City Culture & Arts Award (高雄文藝獎) in the following year.

The troupe is now managed by fifth-generation operator Chang Hsin-hong (張信鴻), who is upholding the family's traditional practices while integrating the latest contemporary trends to create new, modernized puppetry dramas.

Chang Ying-jiao mentioned that the troupe is facing the test of times, especially with television and movies becoming mainstream entertainment, coupled with the development of computer technology and the popularity of animation games, all encroaching upon traditional culture arts and leading to the loss of viewer interest and performance opportunities.

Incorporating computer animation and dazzling lights on stage, "Legend of Mount Banping" is also accompanied by a more modern soundtrack with spoken dialogue to make the play easier for viewers to follow. The aim is to help the public see the artistic value of shadow puppetry and ensure the survival of the family troupe Yung Shing Le.

Chang Hsin-hong remarked that he followed his family performances since he was in third grade and that shadow-puppet sculpturing requires patience and attention to details, but he finds a lot of enjoyment in the craft. As the current representative of the troupe, he aims to use digital marketing and publicity through campus workshops to reach more people and find new viewers for this traditional art form.

He also hopes to bring Taiwanese puppetry to the international stage. In 2012, they performed at the Winged Dragon International Street Theatre Festival and Bobita Puppet Theatre in the Hungarian cities of Nyirbator and Pecs. In 2016, they performed in Japan at the Iida City Kawamoto Kihachiro Puppet Museum. In 2017 and 2018, Yung Shing Le toured the American cities of New York, Detroit, and Ann Arbor.

Moreover, Yung Shing Le was recognized by the Kaohsiung City Government as an outstanding performance troupe for four years straight from 2014 to 2017. The troupe has produced several new plays since, such as retelling the classic 16th–century Chinese novel "Journey to the West," Japanese folk hero mythology "Momotaro," and the Arabian legend "Alibaba."

Yung Shing Le Shadow Puppet Theatre Troupe has experienced many different eras in Taiwan, including the hardships of living under the ban against many traditional performance arts under martial law, but with persistence and new family members, the troupe continues to thrive.