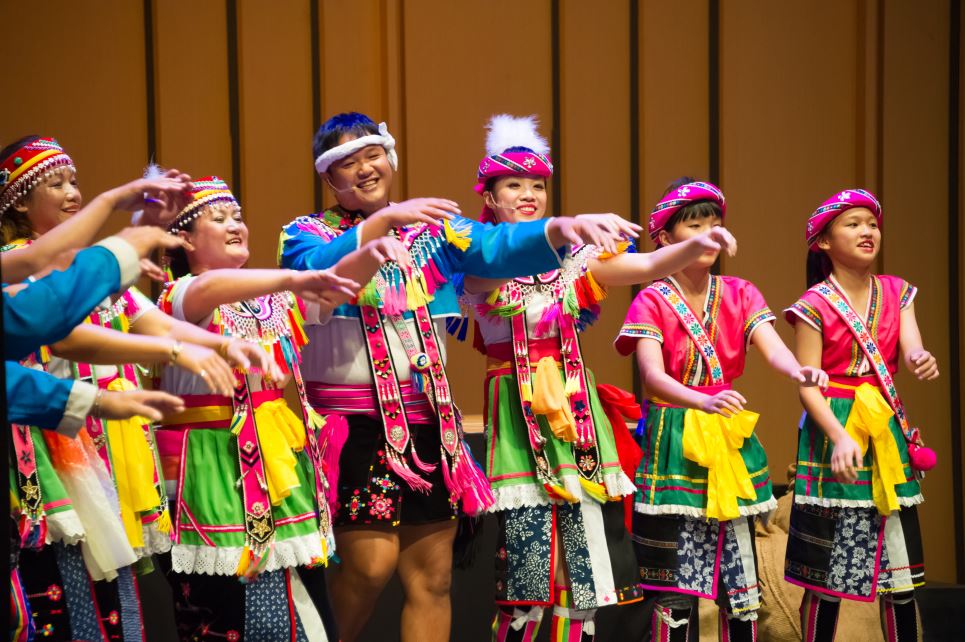 The Chu-Yin Culture and Arts Troupe was founded by Kao Shu-chuan in 1997 to preserve and promote the traditional singing culture of the Amis Malan tribe (馬蘭部落) in Taitung. Their performances are led by tribe elders singing and chanting ancient poem ballads, while women and youths join in with polyphonic voices and praise their ancestors with dancing.

The Amis is the largest indigenous group in Taiwan with approximately 140,000 people. The Amis also has distinctive tribal music, from Amis sacrificial songs to farming work songs, and leisure songs and dances.

The Malan Amis has a unique polyphonic music, in which singing is categorized into "chant" and "singing." There is also lead singing and chorus singing formats, with the integration of high and low voices, and improvisation to complement their unique polyphonic singing music. Additionally, Malan Amis' polyphonic music incorporates "call-and-response," "high voice and low voice," and "curving" singing methods, making it a versatile polyphony form, but also makes inheriting it more difficult.

The troupe aims to pass down the singing tradition and foster mutual appreciation among various indigenous groups through cultural exchanges of music and dances. The group works with indigenous youths in eastern Taiwan to cultivate young talents, aspiring to revive their culture and breathe new life into the rapidly dying traditional singing culture.

Chu-Yin Culture and Arts Troupe has actively participated in nationwide performances and events to present and share the beauty of Amis' unique singing culture with the public, in addition to recording, collecting, and documenting the songs and dances for future generations.

In 2014, the troupe was invited to perform at the opening and closing ceremonies of the 7th International Symposium on Traditional Polyphony in Tbilisi, Georgia. The troupe garnered a lot of attention at the symposium and sparked discussion among the participating scholars and musicologists on the technical and inheritance difficulty of Malan Amis polyphonic singing.

In 2017, the troupe toured with American Steelpan Jazz Fusion group Jonathan Scales Fourchestra to perform in three free public concerts and participated in other cultural exchange activities in Taipei and on Taiwan's east coast.

In 2018, the troupe went on a seven-day European tour to perform in Bratislava, Slovakia and partake in cultural exchanges and lectures at University Komenskeho and University of Vienna.

In Taiwan, they performed in the opening ceremony of Taipei 2017 Universiade, and is annually featured at Taitung City Nga'ay ho Festival.

Another important task Chu-Yin Culture and Arts Troupe has taken on is promoting tribal education. The group started with providing weaving classes and Amis language workshops to encourage participation from the younger generation. The group also continuously organizes children camps and teacher-training seminars.