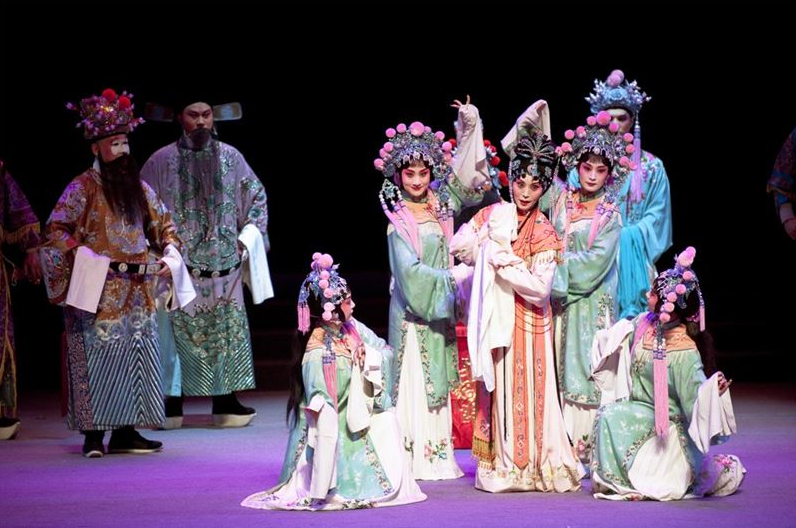 Name: 臺灣崑劇團
Year of Establishment: 2000
Founder: Hung Wei-chu (洪惟助)
Site: Taipei, Taiwan
Did You Know That…?
Taiwan Kunju opera troupe has a diverse repertoire, and with its members averaging just over 30 years old, it has a virtually unlimited amount of potential for future growth. This group of outstanding Kunqu opera performers, trained and guided by a number of well-known masters of the art from China, have not only absorbed the essence of their guides' teachings, but also worked to create their own particular style. Over the years, they have performed the core acts from over half of the classics of the art, along with full performances of operas including "The Peony Pavilion," "Lankeshan," "Kite Romance," "The Butterfly Lovers," "The Jade Hairpin," "Tale of the Pipa," and "The Lion’s Roar." They also periodically hold classes to preserve and develop the arts of Kunqu Opera in Taiwan.

Kunqu, also known as Kun Opera, is widely considered to have the most exquisite literary script and the most delicate performing techniques in Chinese culture. Originated in the Yuan Dynasty, Kun Opera is said to be the mother of all Chinese operas and is one of the oldest forms of opera still existing in China and Taiwan. The accompanying musical instruments in Kun Opera are the bamboo flute, Chinese wind pipe, Chinese clarinet, percussion instruments. It has been listed as one of the Masterpieces of the Oral and Intangible Heritage of Humanity by UNESCO since 2001.

Taiwan Kunju is Taiwan's first professional Kun opera troupe and was founded in 2000 by vocal proponent of the art Hung Wei-chu. In addition to leading the company, Hung is also a distinguished professor at National Central University (NCU) and curator of the university's Kun Opera Museum. Born in Chiayi in 1943, Hung learned to appreciate traditional Chinese and Taiwanese operas at a very young age. His interest in operas revived when he began teaching Chinese literature at NCU in 1973. He has been involved in teaching and researching the lyrics, music, and performance of Kun opera for over four decades, accumulating an impressive collection and a formidable academic portfolio.

From 1991 to 2000, with the support of the Executive Yuan’s Council for Cultural Affairs (now the Ministry of Culture) and the National Center for Traditional Arts, Hung Wei-chu and Professor Tseng Yong-yih, an expert in Chinese opera, co-chaired the "Kunqu Opera Heritage Preservation Project." Through the project, the troupe invites outstanding performers and teachers from various opera companies in China and Hong Kong to come to Taiwan to teach Kun opera. It successfully trained and educated many professional performers, it also helped them to improve their performing techniques.

After the project wrapped up, Taiwan Kunju was formed under Hung’s leadership to continue building on its achievements. Built around impressive participants in the project, the troupe is dedicated to the transmission, promotion, and advancement of the art of Kun opera and the establishment of a professional Kun opera troupe that is also deeply and distinctively Taiwanese. The troupe's members mostly have a background in Beijing Opera, with solid training in choreography and singing.

Over the course of nearly ten years, the troupe had over 400 people involved, performing throughout Taiwan. In addition to putting on Kun opera shows in Taiwan and China, they are also actively involved in promoting the study and performance of the art. In 2000 and 2006, the troupe was invited to Suzhou, China, to perform in the Chinese Kunqu Opera Art Festival, putting on performances that earned them unanimous recognition and praise among the Kun opera community in China. In 2010, they performed in Miyazaki, Japan, and gave lectures at local schools. Their 2013 performances in Heidelberg, Vienna, and Shanghai were well received by audiences and gained favorable coverage in local media.

Hung has not only collected tens of thousands of documents and audio-visual materials, but also valuable relics of Kun opera from the Ming and Qing dynasties. According to Hung, many of the important Kun Opera assets were lost during the Cultural Revolution between 1966 and 1976. To help more people understand this "mother of all Chinese opera," he organized the first Kun Opera Camp, a spiritual successor to the Kunqu Opera Heritage Preservation Project.

As well as organizing a variety of performances every year, Taiwan Kunju also holds a number of educational and promotional seminars to help boost the appreciation of the art of Kun opera among the people of Taiwan. Through this, they aim to promote this fine art and encourage its development and growth in Taiwan. Taiwan Kunju has a diverse repertoire and skilled lineup. This group of outstanding Kunqu opera performers, trained and guided by a number of well-known masters of the art from China, have not only absorbed the essence of their guides' teachings, but also worked to create their own particular style, earning recognition and praise for their talents throughout the Kun opera community.