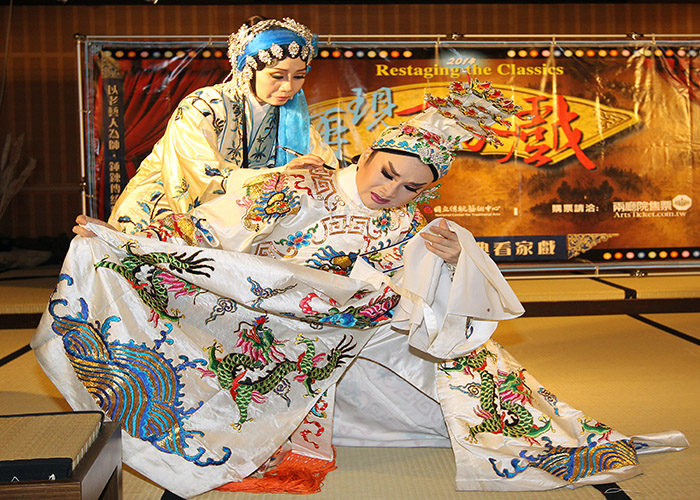 ．Chinese Name: 民權歌劇團
．Time of Establishment: November, 1970
．Location: Taipei, Taiwan
．Did You Know?
The Min Kuan Taiwanese Opera Troupe, with its founders Lin Zhu-an (林竹岸) and Wang Shu-hua (王束花) as its core, boasts a strong line-up of family members and outstanding performers in the industry. Over the course of its 50 years, the troupe has been a tireless contributor to the preservation of Taiwanese operas, music, and singing styles. Lin Zhu-an was honored by the Ministry of Culture in 2018 as a preserver of the backstage music of the important traditional performing art of Taiwanese opera, naming him a National Living Treasure for his efforts in leading the troupe in its active promotion of the tradition.

The Min Kuan Taiwanese Opera Troupe can be often seen performing for Taiwan’s temples, communicating to audiences the joys and sorrows of civil society. In recent years, the troupe has held numerous large-scale public performances and productions, touching on new styles ranging from new adaptations of traditional classics to all new works. Min Kuan is a very typical traditional Taiwanese family theatrical troupe. The founder, Lin Zhu-an, works backstage with his son Lin Jin-quan, who is the current troupe leader and plays the electric keyboard. Lin Zhu-an’s wife Wang Shu-hua is an actor in the troupe, along with their daughter and daughter-in-law, and the old director’s daughter Lin Chan-yuan plays dan (旦) roles (female roles). The Min Kuan Taiwanese Opera Troupe is dedicated to preserving the traditional flavor and repertoire of Taiwanese operas. In recent years, it has also devoted itself to the creation, development, preservation, and transmission of the art of Taiwanese opera, hoping to contribute to the heritage of the form through innovative productions that offer new insights from within old traditions.

Founder Lin Zhu-an was born on January 8, 1936, and raised in rural Yunlin. He showed a talent for music in elementary school and was especially good at playing strings. When he graduated from junior high school at the age of 15, he met Li Bi, the lead qin (奏) player for the Chiayi’s Jin Hua Xing Opera Troupe, when they were performing at the Yuanchang Theater in Yunlin. Drawn to the backstage work involved in koa-á-hì, Lin decided to learn to play the daguangxian (大廣弦) from Li, traveled around the country with the Jin Hua Xing Opera Troupe. At the age of 16, he joined Taichung’s Jin Yu Ji Opera Troupe as second-string player, playing the daguangxian. Three years later, Lin’s outstanding performance saw the troupe leader decide to make him the lead qin player. He then also began playing the kezaixian (殼仔弦) for the troupe as well.

In 1957 and 1960, Lin found himself unable to travel abroad with the troupe due to issues around his national service, and so he decided to return to his hometown, Yunlin, where he opened the New Xihu Tea Shop with a friend. However, after only a few months, he gave up the tea shop business and returned to his passion, koa-á-hì. At the age of 25, he was invited to join Tainan’s New Nanlong Opera Troupe, where he met its lead singer Wang Shu-hua. In 1962, the two tied the knot. After being discharged from the army at the age of 28, Lin returned to the Tainan troupe, beginning a period of great instability due to changes in the wider environment. After repeatedly encountering setbacks in several different theater groups, Lin decided to bring his family to Taipei in search of new opportunities.

Also in 2006, Lin Chu-an was honored with the Excellent Musician Award in the Taipei Local Theatre Performance Awards, followed by the Taipei County Traditional Artist Award in 2010. In 2018, he was named by the Ministry of Culture as a preserver of the important traditional performing art of koa-á-hì backstage music, joining the ranks of Taiwan’s true National Living Treasures.