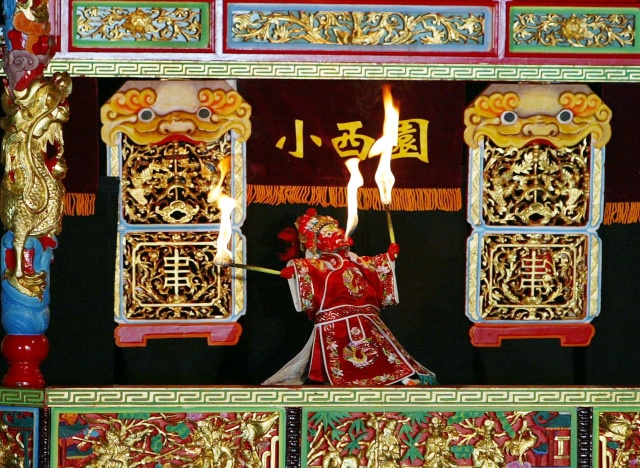 Hsiao Hsi Yuan, a traditional puppet theater, is one of Taiwan's most highly regarded hand puppet troupes. It has continuously refined the traditional art form to meet new audience demands for well over a century.

Founded in 1913 by the late Hsu Tian-fu (許天扶), Hsiao Hsi Yuan's classic and graceful dialogues and unique performances - which include the use of props such as fire torches - have helped preserve the otherwise dwindling art of hand-puppet theater in Taiwan.

The troupe also insists on being accompanied by a live band. Apart from utilizing lively and animated Beiguan music made with string and woodwind instruments, the performances also include innovative use of gongs and drums more commonly associated with Peking opera.

The founder's grandson, Hsu Kuo-liang (許國良), is also well-known in the sphere of Taiwanese traditional performance arts. He has invested over 75 years in hand-puppet theater, and established the "Hsiao Hsi Yuan Wooden Puppet Art Workshop” in 1991 in hopes of passing on puppet design and craftsmanship to the next generation.

In recognition of its ongoing efforts and contributions to the puppetry industry, the group was honored by the Ministry of Education in 1975 with the National Folk Arts Heritage Award. Hsu Wang also received the National Award for Arts in 2011.