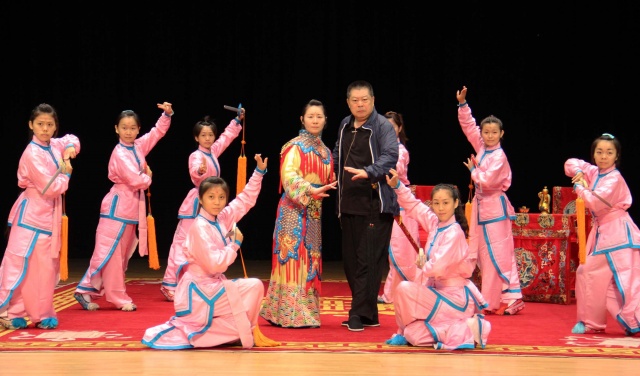 The founder of the Rom Shing Hakka Opera Troupe, Cheng Rom-shing, is the grandson of the famous Hakka singer and actress Cheng Mei-mei. He studied Hakka performing arts, including the intricate culture and rituals related to tea-picking, for many years before reorganizing his grandmother's Hakka opera troupe in 1986.

The following year, the Chinese Folk Arts Foundation asked him to stage some traditional Hakka tea-picking opera performances as part of the 1987 Taipei Summer Open-Air Arts Festival. Their performances were greeted with such enthusiasm that Cheng subsequently decided to register the troupe as the "Rom Shing Hakka Opera Troupe" on Oct. 24, 1988. Since then, the troupe has performed across Taiwan to preserve and promote the traditional Hakka opera art form.

Rom Shing Hakka Opera Troupe performs works of traditional Hakka tea-picking opera that originate in southern China, where women would sing during the harvesting season as they gather around to pick the tea leaves.

Many Hakka opera themes focus on relationships between family members, such as men and women, or the elderly and youth, usually involving three performers ‒ two female singers and one fool for comedy effect. Among some of the troupe's best-known works are performances of "The Education," a satire, and "The Celebration by Three Gods," a jolly drama.

However, as the newest impresario Cheng Yueh-ching assumed the leadership role in 1998, the troupe has shifted toward larger-scale operas, such as "The Descendants," which portrays events following the pregnancy of a princess, and "Daizai Men," which was shortlisted for the Taishin Arts Award. They have performed on both national and international stages, winning several accolades for drama, traditional music, and their efforts in preserving the Hakka legacy.

The troupe also produced "The Lord's Concubine" to celebrate its 25th anniversary of establishment, by integrating elements of Peking opera, Taiwanese opera, and modern theater to create new possibilities for Hakka opera.

Since 1997, the troupe has set up a Hakka Opera Training Academy in Miaoli to train young performers. Upon completion of the 4-year training program, many young talented performers emerge and develop into important operatic performers.

Now consisting of three generations of performers ‒ seniors, youths, and apprentices ‒ and a growing overseas fan base, the Rom Shing Hakka Opera Troupe has gradually transformed from a local troupe into an international one.