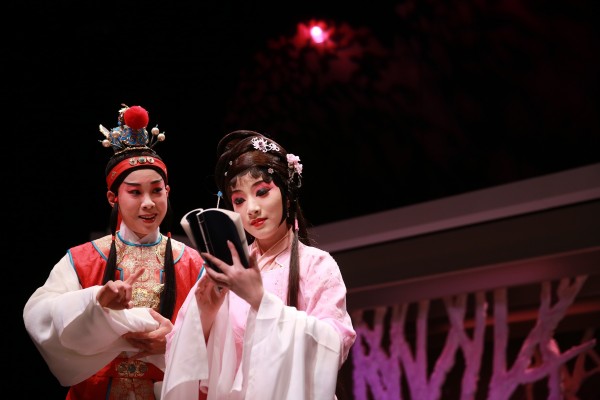 1/2 Q Theatre is a Kunqu opera troupe that brings new life to classic Chinese musical drama through modern theater and innovation. Its bold theatrical experiments have presented diverse elements of Taiwan’s culture and astonished audiences with its dynamic performances.

Dai then produced “Portrait of Love (情書)” and “Nanke Story (戀戀南柯),” which both received positive feedback. Encouraged by the success, Dai formed the 1/2 Q Theatre with Yang and playwright Shen Hui-ru (沈惠如) in 2006 to continue ahead with experimental spirit. The group seeks to coax out the beauty of Kunqu opera through modern theatrical presentations without losing the aesthetics of traditional opera.

Upon its establishment, the group was invited to join the Eslite Play Festival, where they performed “Boat Fantasy for Mona Lisa (小橋幻想詩 – 為蒙娜麗莎而做),” a production adapted from a Kunqu opera written by Wu Zao (吳藻) in the Qing dynasty. The group gave new life to the traditional piece by keeping the original order of the ten songs, re-editing the ballad to make it easier to comprehend, and adding new theatrical elements.

The group has continued to create pieces that integrate classical and avant-garde elements. “Dust of Time (流光似夢),” its latest production performed at the 2017 Taiwan International Festival of Arts, reintroduced the little-known “The Purple Flute (紫簫記)” to the audience through modern methods of projection, stage design, and other technology.

Over the past decade, the group has established a distinguished style and given new meaning to the classics. It hopes to create dialogue with audience members and raise public awareness of the valuable cultural heritage of Kunqu.