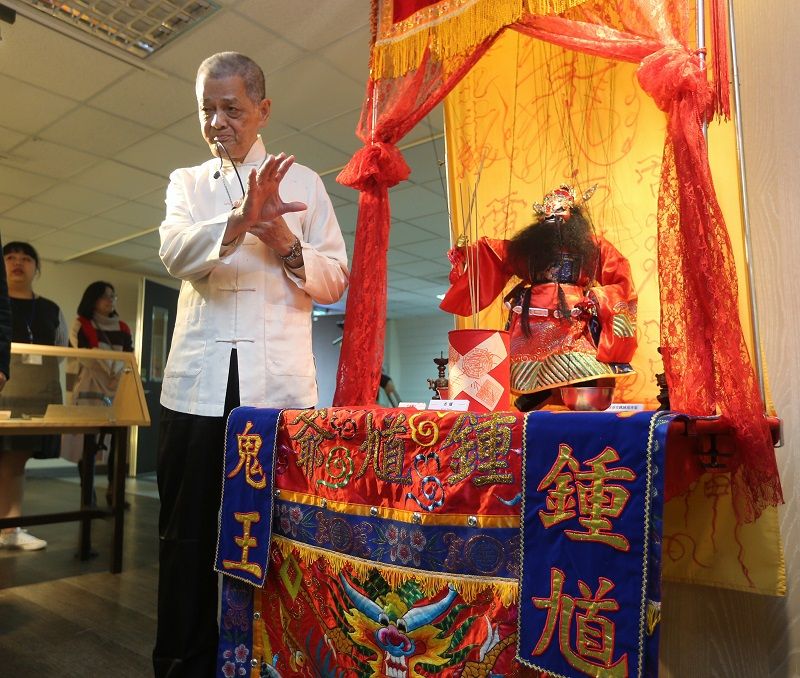 In times gone by, taboos meant that it was rare for the general public to witness the "Dance of Zhong Kui." The rite was a highly mysterious one, which ultimately resulted in its gradual disappearance due to the rarity of its transmission. Ching Ch'un T'ang Puppet Theatre Company founder and leader Lin Chin-lien has transformed this esoteric art into "ritual theater," using innovative methods to break down the old taboos and pull back the curtain that once enshrouded this rite.

While there have been theatrical elements attached to the "Dance of Zhong Kui," unlike common performances, its goal is not to entertain audiences, but rather to exorcize evil spirits, giving it a distinctively folk-religious air. Zhong Kui is a deity renowned for his ability to drive off demons and disease and to bring blessings. When breaking ground on a new temple or opening a new stage for performance, folk custom holds that the "Dance of Zhong Kui" must be performed first to exorcize any evil spirits and welcome in the benevolent gods, after which the venue may then be put to use.

In Taiwan, the Dance comes in two forms. In one, a master of rites performs the role of Zhong Kui himself and carries out the rite, while in the other, the master operates a marionette instead. Regardless of which form is performed, the rite is considered to generate an atmosphere of powerfully negative energies, and it is generally recommended that members of the public not be present. Marionette puppetry is less popular for festive occasions, but a major part of exorcistic performance, and as such marionettes have become indispensable to the performance of the "Dance of Zhong Kui."

The use of marionettes, and later glove puppets, in this rite stretches back centuries in Taiwan. Lin is one of the few remaining masters of it, having begun learning the "Dance of Zhong Kui" from his father at the age of 15. At 18, he began studying Taiwanese glove puppetry under maestro Li Tien-lu (李天祿), going on to become a veteran performer. In 1994, at the age of 60, he founded Ching Ch'un T'ang Puppet Theatre Company.

Initially, the company primarily performed traditional glove puppetry, or pò͘-tē-hì, but later made a marionette performance of "Dance of Zhong Kui" its central focus by combining the Dance with the writing of supernatural talismans and entreaties to the gods for safety and security. Lin also organizes special rites praying for blessings focused around the trio of Heaven, Earth, and Man, using talismans to create a protective barrier and beseeching the soldiers and generals of the heavens to stand guard over those in attendance, thus overcoming the ancient taboo against public witnessing of the Dance.

For the past ten years, Ching Ch'un T'ang Puppet Theatre Company has been part of the ceremony blessing the main lanterns at the annual Taipei Lantern Festival. They have also performed around Taiwan, including for the Puppetry Art Center of Taipei, Dadaocheng Theater, and Cloud Gate Dance Theatre. In recent years, the company has been committed to promoting the art of marionette puppetry, working to ensure this traditional Taiwanese art form and its Zhong Kui specialty are passed on and preserved.