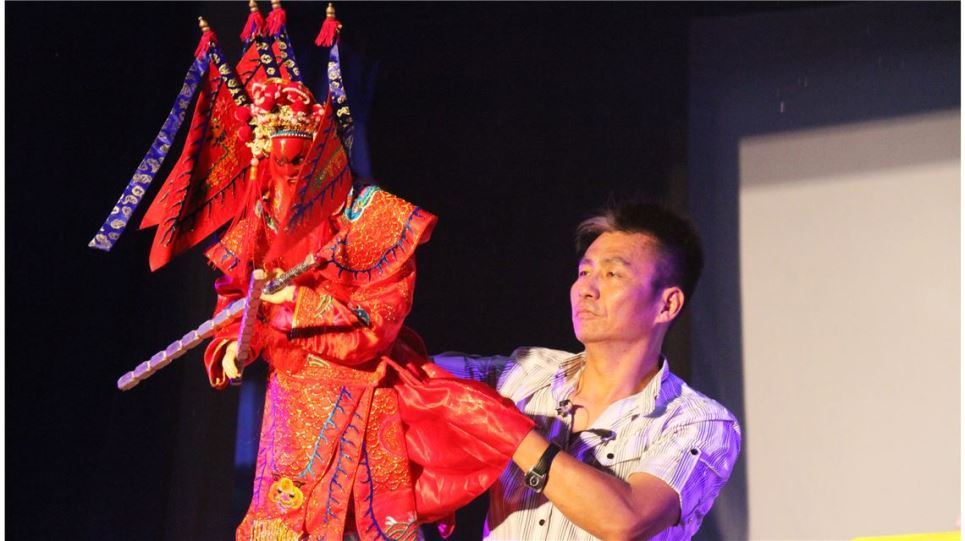 Active since March 1970, Jin-Ing-Ger Puppet Troupe held public performances in front of temples and inside theaters all over Taiwan under the leadership of founder Chen Lao-hsiao (陳老笑). In those days, they used traditional puppets, around 35cm tall.

In 1980, the second generation of leadership took the reins — Chen Jin-hai (陳錦海). Pursuing a higher quality of performance, the younger Chen added a variety of lighting equipment and imported concert-grade sound systems from abroad. He also increased the size of Jin-Ing-Ger's puppets to between 65cm and 97cm.

In 1990, Chen Huang-pao (陳皇寶) became the third-generation leader of the troupe, making his mark through the development of "stunt puppets" that could do all kinds of tricks in live performances that were only possible through skilled editing on television before. The best known of these are puppets that could fire arrows from horseback or perform drunken boxing, as well as the first-ever Taiwanese puppetry performance of Sichuan-style bianlian, or "face-changing," routine.

Chen Huang-pao also improved the physical and theatrical aspects of his show, using television-sized puppets for all performances, which came with an upsizing of the stage settings to about 16 meters. Each live show includes stunt and fight scenes resulting from the hard work of the troupe members.

During performances, they also make use of active sets, bringing together ideas from theater, television, and cinema to create diverse and dynamic scenes that bring the show even more to life for the audience.

To make it easier for audience members to see the show from further away, and to help everyone get a clearer sense of the expressions on the puppets, Chen Huang-pao has recently been investing in projectors and cameras so the action can be simulcast as it plays out, letting everyone follow along closely with the joys and sorrows of their favorite characters.

The troupe is also involved in rural community events, along with providing supervising teachers for puppetry clubs at local junior and senior high schools in the Kaohsiung area. Members hope that in the future, these teachers, their students, and the public in general can help pass on this theatrical art and keep it alive for future generations to come.