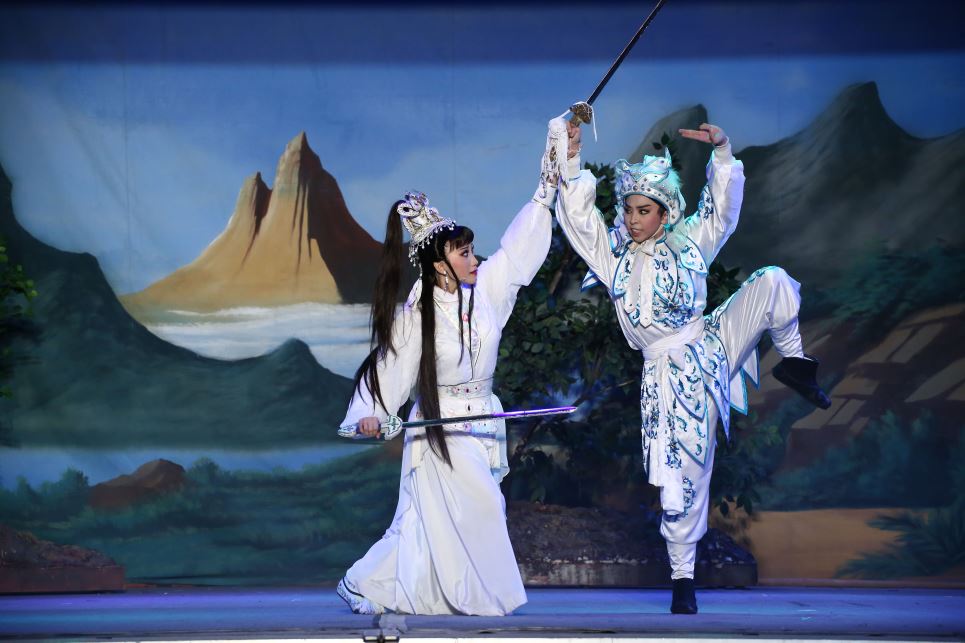 As Taiwan's only government-founded Taiwanese opera troupe, Lan-Yang has frequently toured the United States, Costa Rica, Canada, Singapore, and Japan to promote this Taiwanese theatrical form, making it the typical showcase of traditional Taiwanese arts that has represented the heritage of overseas Taiwanese communities.

On Sept. 1, 1992, Lan-Yan began cultivating its members while completing the auditions of its first batch of apprentices. On the 28 of that month, the company was officially founded, with its core members mostly composed of children from Taiwanese opera families and graduates from the I-Lan Commercial Vocational Senior High School, especially those who took part in afterschool clubs for Taiwanese opera.

After eight months of training, the troupe premiered the Yilan version of "Sam Pek Eng Tay (山伯英臺)" in May 1993 at Jeh Toufen of Yuanshan Township, the region from where Taiwanese opera allegedly originated. The next day, the troupe performed the Yilan edition of "Chen Sun Wu Niang (陳三五娘)," one of the four most popular Taiwanese opera titles among local audiences, at the Yilan County Cultural Center.

To celebrate its 20th anniversary in September 2012, the company debuted its new opera, "Matsu Blesses All Beings (媽祖護眾生)" spearheaded by director Cheng Wen-tang (鄭文堂), right at a Matsu temple in its home county. Choosing the temple as the venue for the show was based on a common hope that the deity would bless the troupe with good luck when it embarks on a journey to perform at Matsu temples in non-Yilan counties across Taiwan.

The Yilan County Government began to strengthen its cooperation with the National Center for Traditional Arts over performance and talent cultivation after the county government saw no response to its 2016 proposal that Lan-Yang should be elevated to a national-level troupe. However, the Ministry of Culture began allocating funds in 2019 through the Executive Yuan's Forward-looking Infrastructure Development Program to help the Yilan County Government upgrade Lan-Yang and the county's performance venues, as well as to promote and perpetuate the culture of Taiwanese opera.

With the National Center for Traditional Arts as its performance platform and the Ministry's funds as its performance budget, Lan-Yang aims to become the major revenue earner for the operations of Yilan's regional art venues so that all forms of arts can further deepen their roots in the county.

Besides organizing public performances, Lan-Yang is a public organization that is also tasked with preserving the culture of traditional Taiwanese opera through educating the public, producing original content, and cultivating talents for this field in scriptwriting, props-making, wardrobe arrangement, theatrical techniques, and other relevant aspects.

Lan-Yang hopes it will be able to rejuvenate and stay robust at a time when traditional theatrical arts are facing a throng of challenges in a transitioning Taiwan society. In the meantime, it will continue to present the exquisiteness of Taiwanese culture, the local features of Taiwan, and the affable style of Taiwan's folk arts through its performances on both local and international stages.