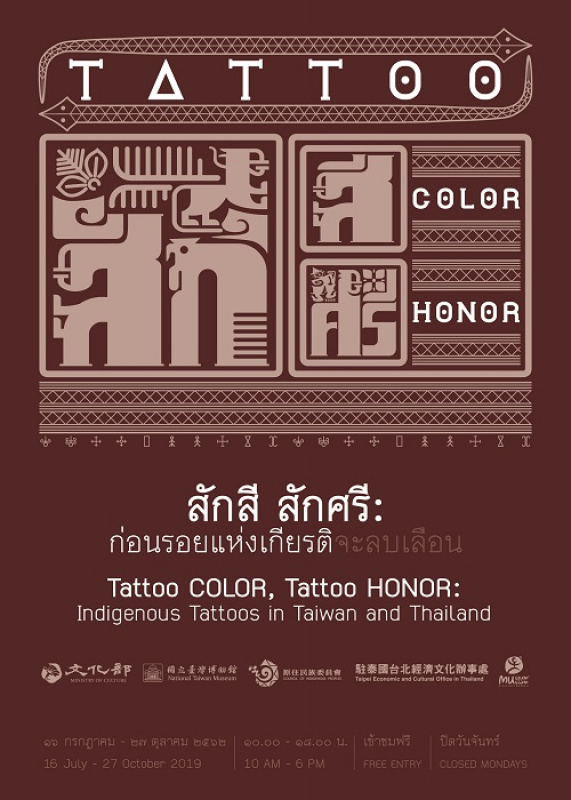 Curated by the National Taiwan Museum, the "Tattoo COLOR, Tattoo HONOR" exhibition is scheduled to run from July 16 through Oct. 27 at the Museum Siam of Thailand to showcase the facial and body tattoos of the Taiwanese indigenous Atayal and Paiwan tribes.

The displays include rare photos of hand tattoos belonging to indigenous elders, videos of oral interviews with tattooed indigenous individuals, tattooing tools, tattoo patterns, and wooden carvings of tattooed figures, reflecting the evolution of this precious cultural heritage. Among them is an exceptional photo of a Paiwan tattoo artist taken in the early 1900s.

NTM Director Hung Shih-yu (洪世佑) stressed that this exposition hopes to tells of how Taiwanese indigenous tribes began retracing their tattooing traditions. For them, body and facial tattoos represent pride and honor, inspiring the museum to work with tribal history scholars from the Atayal in northern Taiwan and the Paiwan in southern Taiwan to gather oral history and documentation for the Thai exhibition.

He added that "Tattoo COLOR, Tattoo HONOR" is held with the aim of inspiring all tribes across Taiwan to better understand, respect, and tolerate each other's respective cultural differences while helping Thai exhibition-goers learn more about the rich tattooing culture of Taiwan's indigenous peoples.

Angusan Palivulj (陳文山), a Paiwan clansman who is also the chief of Nanhe village of Pingtung County's Laiyi Township in southern Taiwan, pointed out that for his tribe, which has no written linguistic system, tattoos represent not just pride but also a symbol of social status.

He said although Laiyi has the largest number of elders with tattooed hands of all townships in Taiwan, this tradition is increasingly dying out in his township along with the elders. The erosion of heritage has awakened his tribe to the importance of preserving their customs, inspiring even more young members to put tattoos on their hands.

Baunay Watan (弗奈˙瓦旦), an Atayal cultural scholar who founded the Atayal's Lihang Workshop, pointed out that facial tattoos represent the tribe's perception of life, moral values, and the cosmos, as the tribal men were qualified to have their faces tattooed only when they acted bravely on the battlefields and in hunting, or after beheading their enemies. For women, they had to be highly capable in the art of weaving.

A legend prevailing in his tribe is that only those with facial tattoos can cross a legendary rainbow bridge in the afterlife and be recognized by their ancestors. However, he is also worried that the facial tattooing tradition would fade into history when all the elders pass away.

"Tattoo COLOR, Tattoo HONOR" is the second NTM-organized exhibition in Southeast Asia in recent years following "Pulsation-Biodiversity of Vietnam˙ Taiwan Photography" hosted by the Hanoi Museum in Vietnam in 2017.