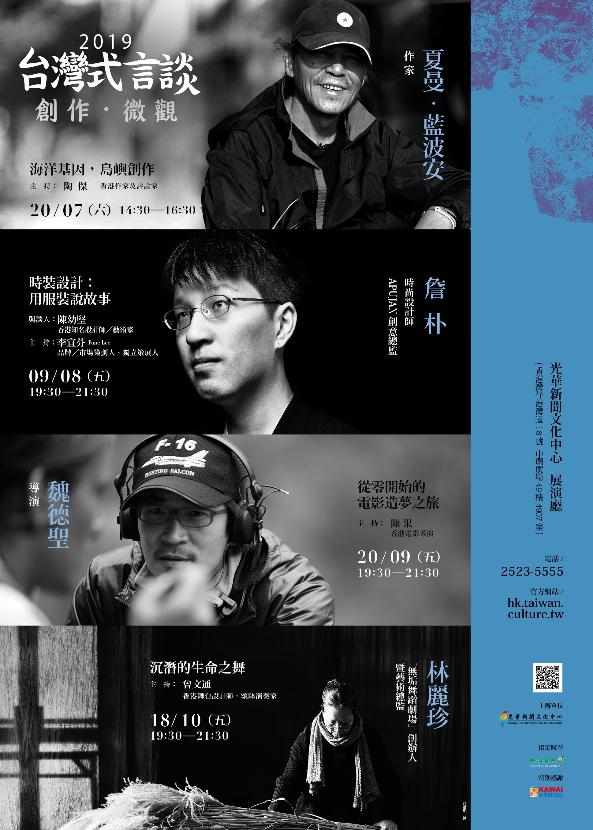 Established by the Kwang Hwa Information and Culture Centre, "Talks a la Taiwan" have been held for eight consecutive years to promote Taiwanese culture in Hong Kong. Scores of scholars, artists, and cultural professionals from Taiwan have joined the series, sharing topics encompassing literature, film, cuisine, fine arts, architecture, and the environment.

Syaman Rapongan, 61, was born and raised on Orchid Island, a small island off the southeastern Taiwan coast. The author often describes each individual as an ocean full of drifting dreams, and that answers can only be sought by overcoming barriers and exploring the outside world.

On July 20, Syaman Rapongan will share his unique literary vocabulary derived from the maritime culture and traditional world of the Tao, which currently numbers less than 4,000 members today.

Apu Jan, 32, is a London-based fashion designer whose knitwear collections often grace the covers of Vogue, ELLE, Wallpaper*, Bazaar, and GQ. Apart from designing costumes for Cloud Gate productions including "Formosa," he has also created several unique garments that are now part of the Calais Lace Museum's permanent collection in France.

On Aug. 9, Jan will discuss how he presents Taiwan's fashion aesthetics and cultural diversity through his interpretation and utilization of fabrics, materials, and colors.

Wei Te-sheng, 49, is a director and screenwriter who first rose to prominence with his debut feature "Cape No. 7 (海角七號)" in 2008. He then built upon the success to make the epic saga "Warriors of the Rainbow: Seediq Bale (賽德克·巴萊)," which was named Best Feature at the 48th Golden Horse Awards.

On Sept. 20, Wei will delve into creating a cinematic empire by scratch and his ongoing endeavors to learn more about local history to better reflect the historic perspectives of the Taiwanese people through his films.

Lin Lee-chen, 69, is the founder and artistic director of Legend Lin Dance Theatre (無垢舞蹈劇場), an award-winning troupe that brought Taiwanese choreography to the international scene with enduring productions including "Anthem to the Fading Flowers (花神祭)" and "Miroirs de Vie (醮)."

On Oct. 18, Lin will reveal the importance of self-discovery and how taking time to experience life has helped her understand her own body and develop new aesthetics.